This follows on from Rachel's post. We are all armchair travellers now!

Fifty-odd years ago I was in Morocco. Allen, my late husband and I went on a camping trip every year, mainly to Spain but also to surrounding countries. We had quite a large tent, which took a long time to put up and take down. We ate out every other night and survived on M and S tinned goods for the rest of the time. Usually, we took a ferry from Southampton to Northern Spain. I was often seasick if the Bay of Biscay was rough; we were in separate, segregated cabins for four - the cheapest - low down on D Deck, where the waves bashed against the ship above our heads!

Anyway, on to the Moroccan trip.  We reached Tarifa in Southern Spain and had to while away an afternoon in a beachside cafe, awaiting the car ferry to Tangiers. We ordered Sangria and they served us a huge jug, liberally laced with alcohol and lots of fresh fruit pieces floating amongst the ice cubes. It was the best ever and allayed any anxiety we had about the unknown territory of Africa.

I wish I had kept a diary of those days. All our photos were on slides, long since lost as I've moved around the world to work. I can only remember bits and bobs. Once some local boys offered to guard our car for us and spat "Jews" when we refused to avail ourselves of this service. We must have visited the famous Roman site of Volubilis, as Allen was an archaeologist, but I have no memory of that. We certainly went to Marrakesh and visited the teeming central square. I think we hired a local guide to show us around the maze of the market. We didn't buy a carpet but we both acquired a hand-made djellaba to wear.

The next adventure was over the Atlas Mountains to Erfoud and Ouarzazate. It was hot driving along those desert roads, and hardly any other cars were on the roads. I remember arriving at one camp site which was beset by hungry stray dogs. A French woman in a caravan advised me to pick up a handful of stones whenever I went across to the shower block, in order to throw them at these dogs. Somewhere we saw the famous "blue men" come to trade at the market. There was nothing much to see at the time (now it's very developed for tourists), but we did hire a guide to take us on a breathtaking drive to see the sunrise over the dunes - in our own car, which somehow survived the trip! It was a newish Renault 6.

After the Coronavirus crisis, I want to go again. I've already bought the guide book. I think I'll have to go with a group tour as women on their own are suspect over there. 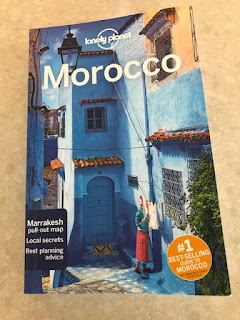 Posted by Margaret Butterworth at 8:40 PM