Our Sunday morning walks now start at 7.30 am in order to beat the summer heat. If it’s a long drive to the start point, I don’t always feel like getting up that early. Today I forced myself, leaving the house before 7.00 am. We met at Burns Beach, a coastal suburb to the north of Perth where there is so much construction going on. New houses with sea views are all the rage and this northern corridor is spreading relentlessly. The cafe, under new ownership, is now called Sistas. It was bursting at the seams and the queues so long that nobody wanted to wait.
Jack led us northward. Usually we go south on the coastal footpath, but this has been blocked at some point since they are building a marina at Ocean Reef. The group always sets a pace that is too fast for me. Eventually I sat down on a seat, knowing that I could pick them up on their way back. I studied a new interpretive sign about the area: 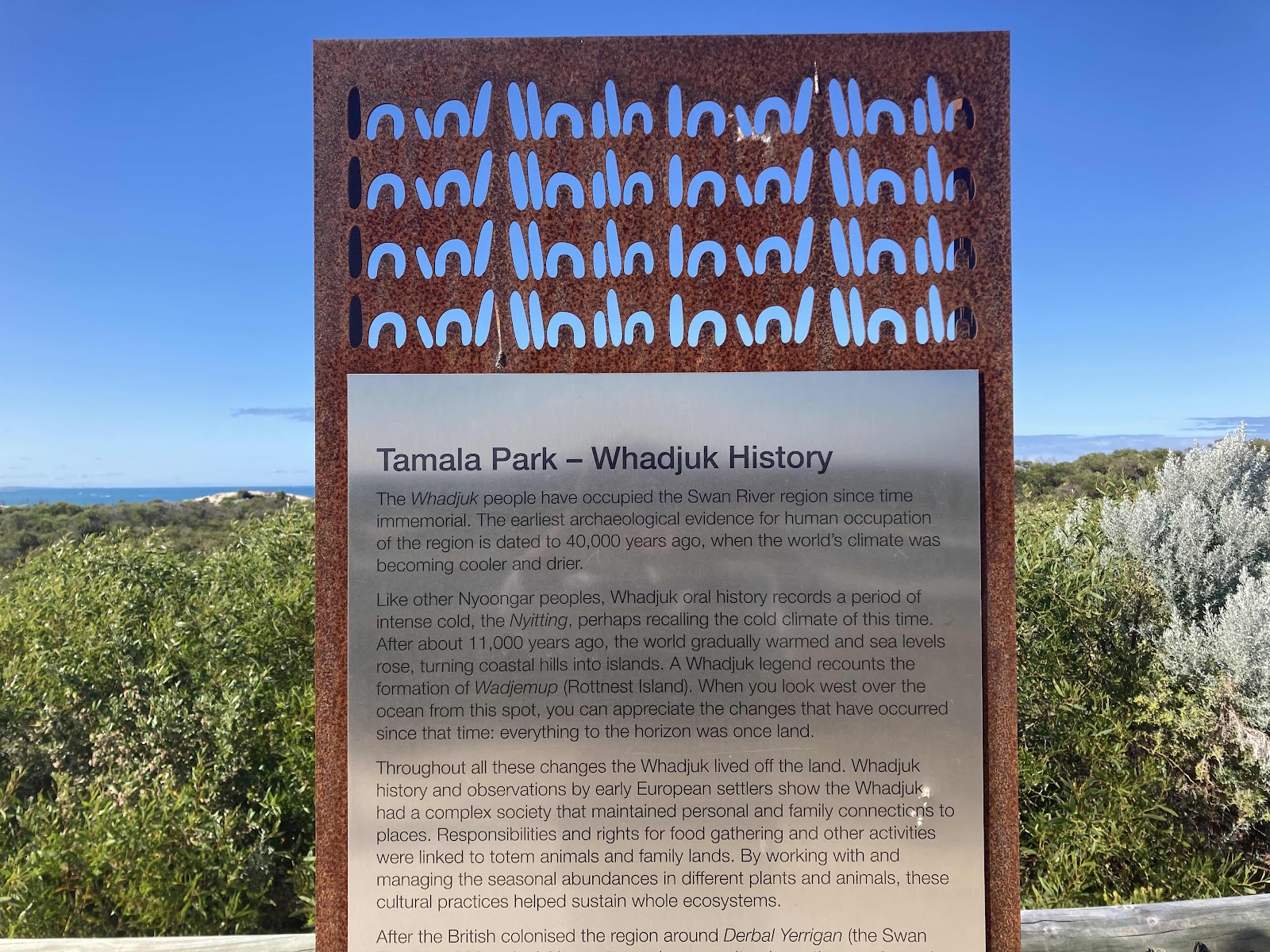 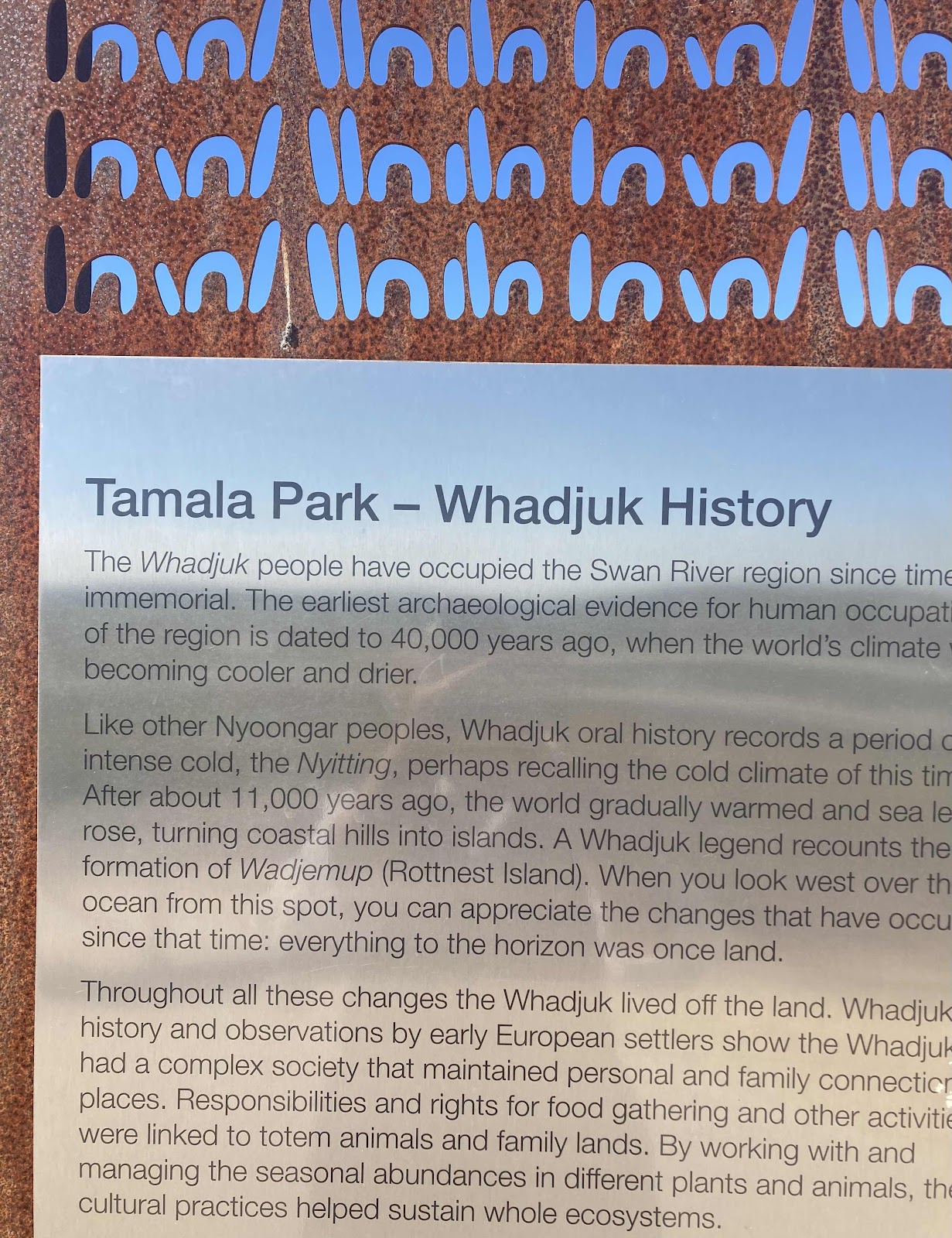 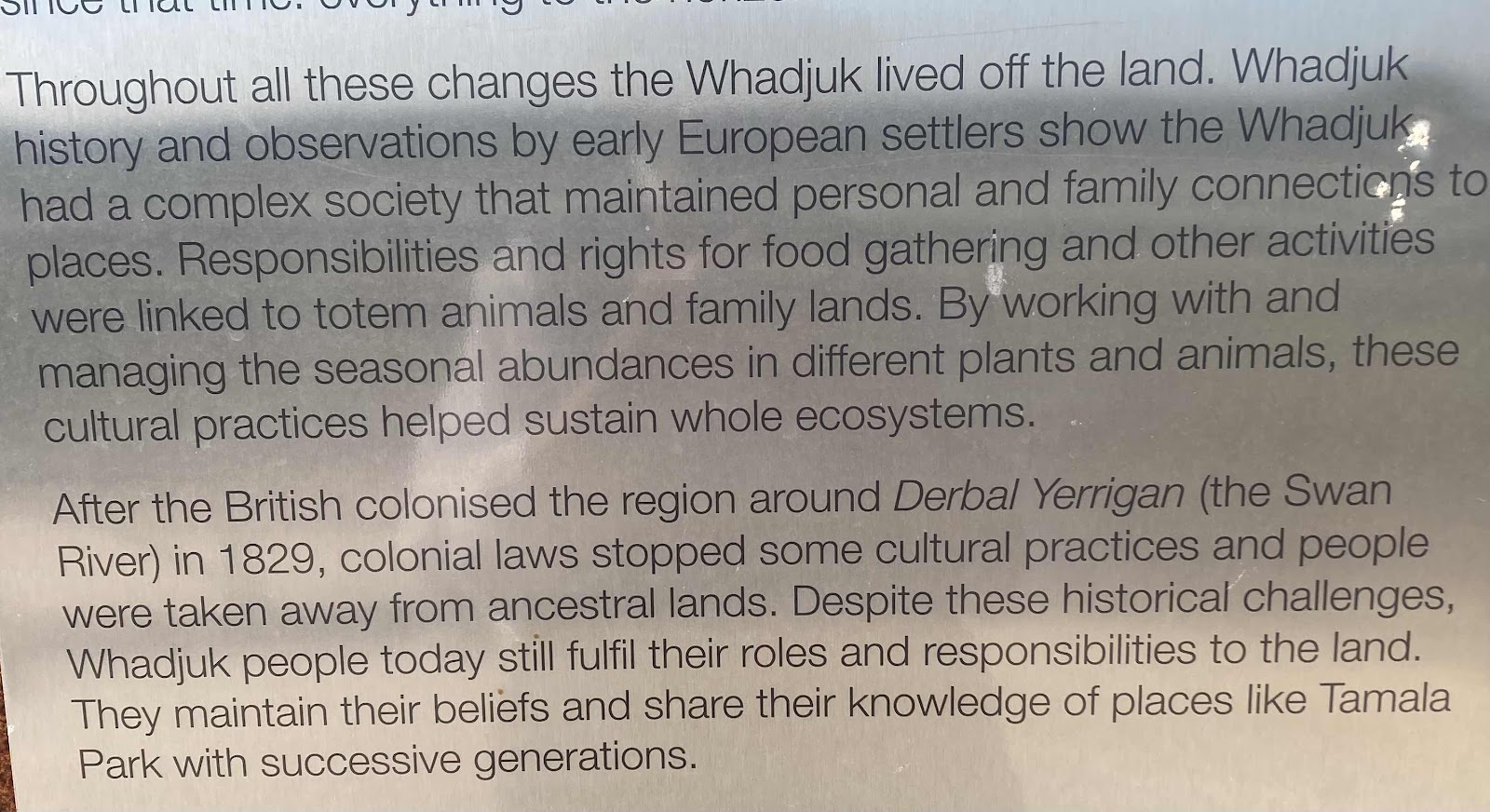 There has been a huge amount of work constructing this coastal footpath, as well as attempts to stabilise the sand dunes. They have laid matting down which stops the sand eroding and eventually small plants get established and the matting rots away: 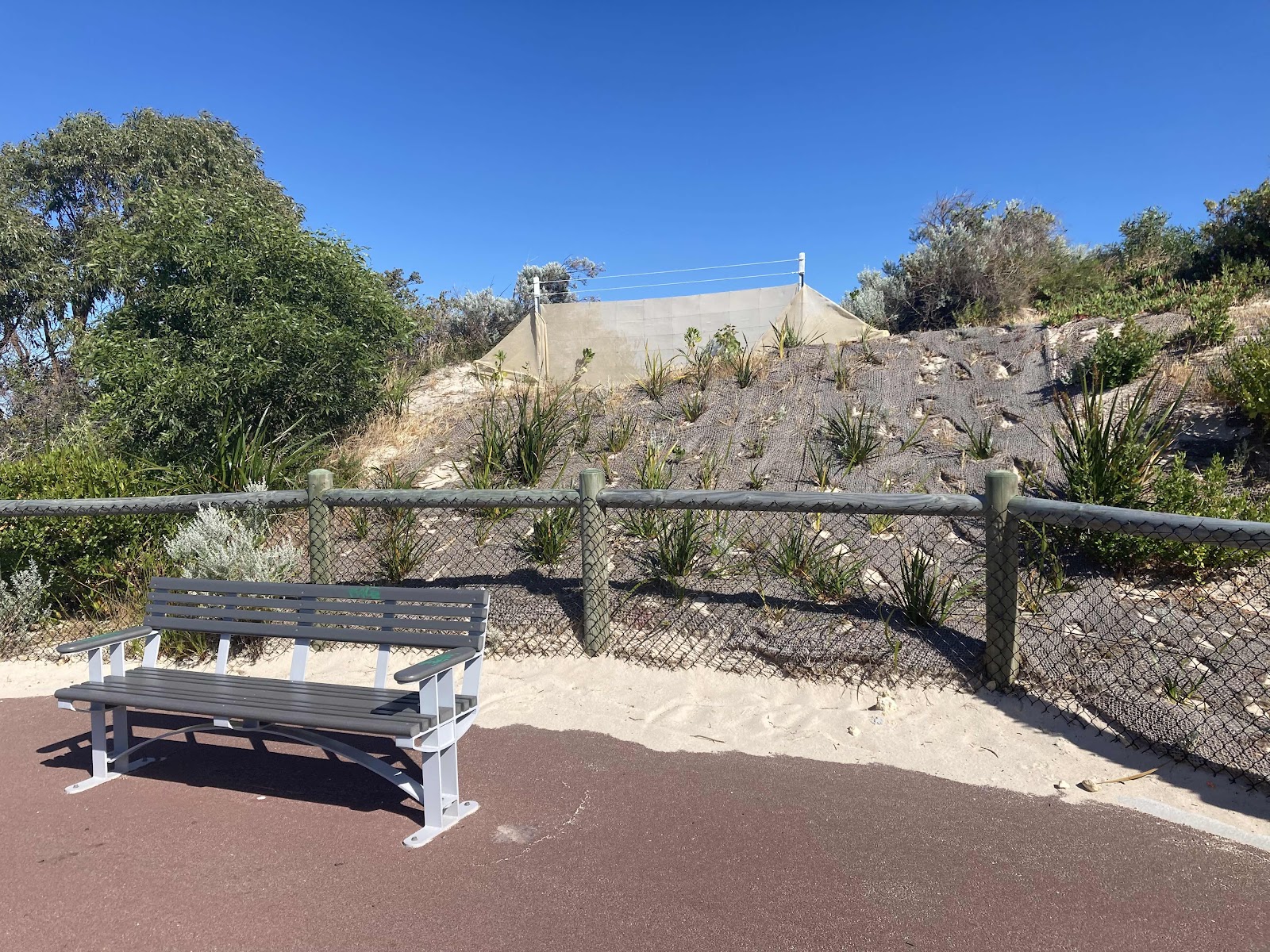 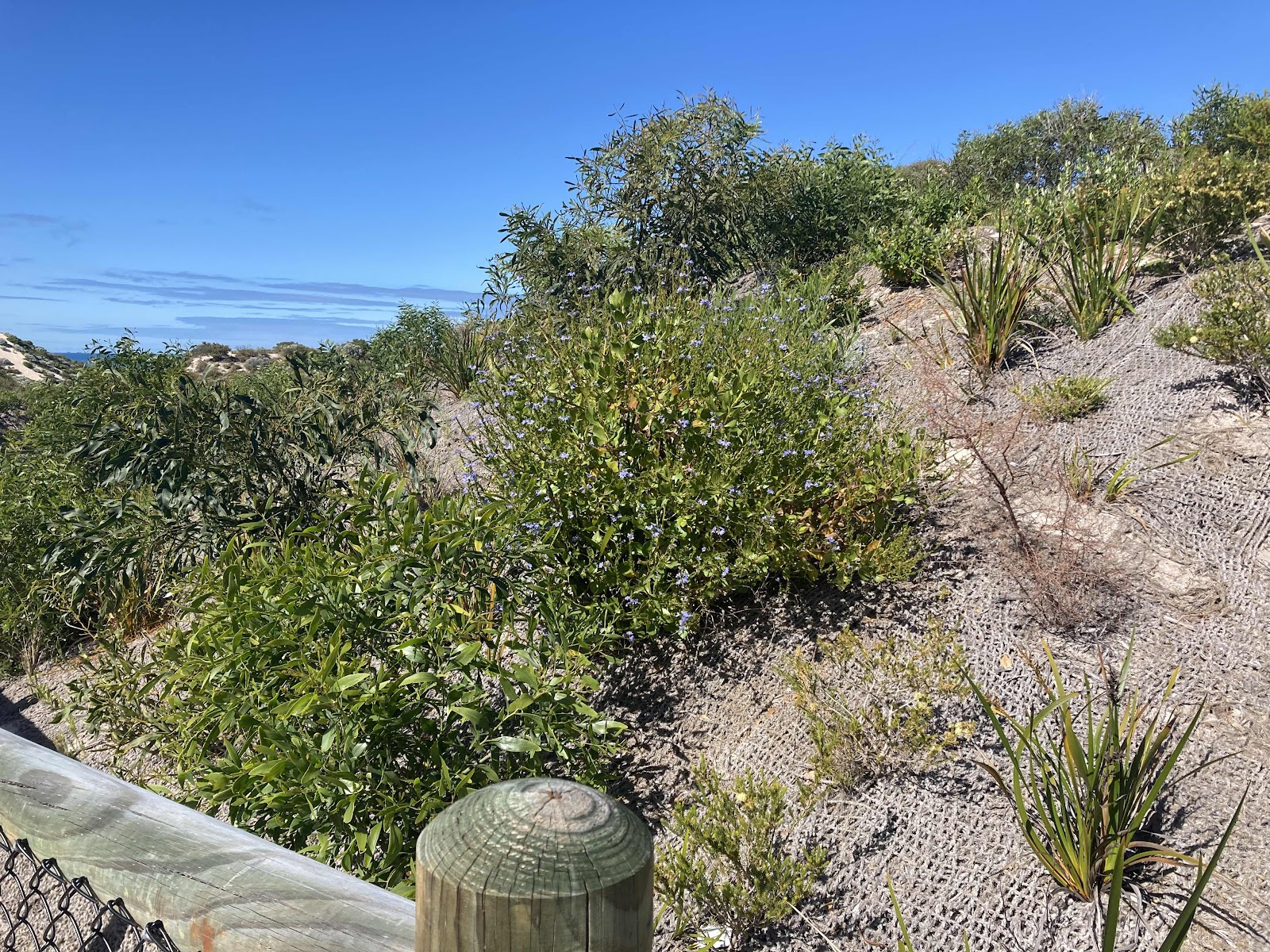 Posted by Margaret Butterworth at 1:26 AM 2 comments:

Have-A-Go Day 2022 is celebrating its 30th anniversary this year in Burswood Park. It’s within walking distance for me and entry is free (unlike many other events these days!) The idea is to encourage seniors to try something new: wall climbing or canoeing or whatever. The Premier made the opening speech, reminding us that life is for living. In retirement we all need to get out there and socialise and take part in some physical activity. The WA Police Pipe Band played Advance Australia Fair to start the proceedings (a nicer job for them than patrolling the streets of Northbridge at night, I imagine). 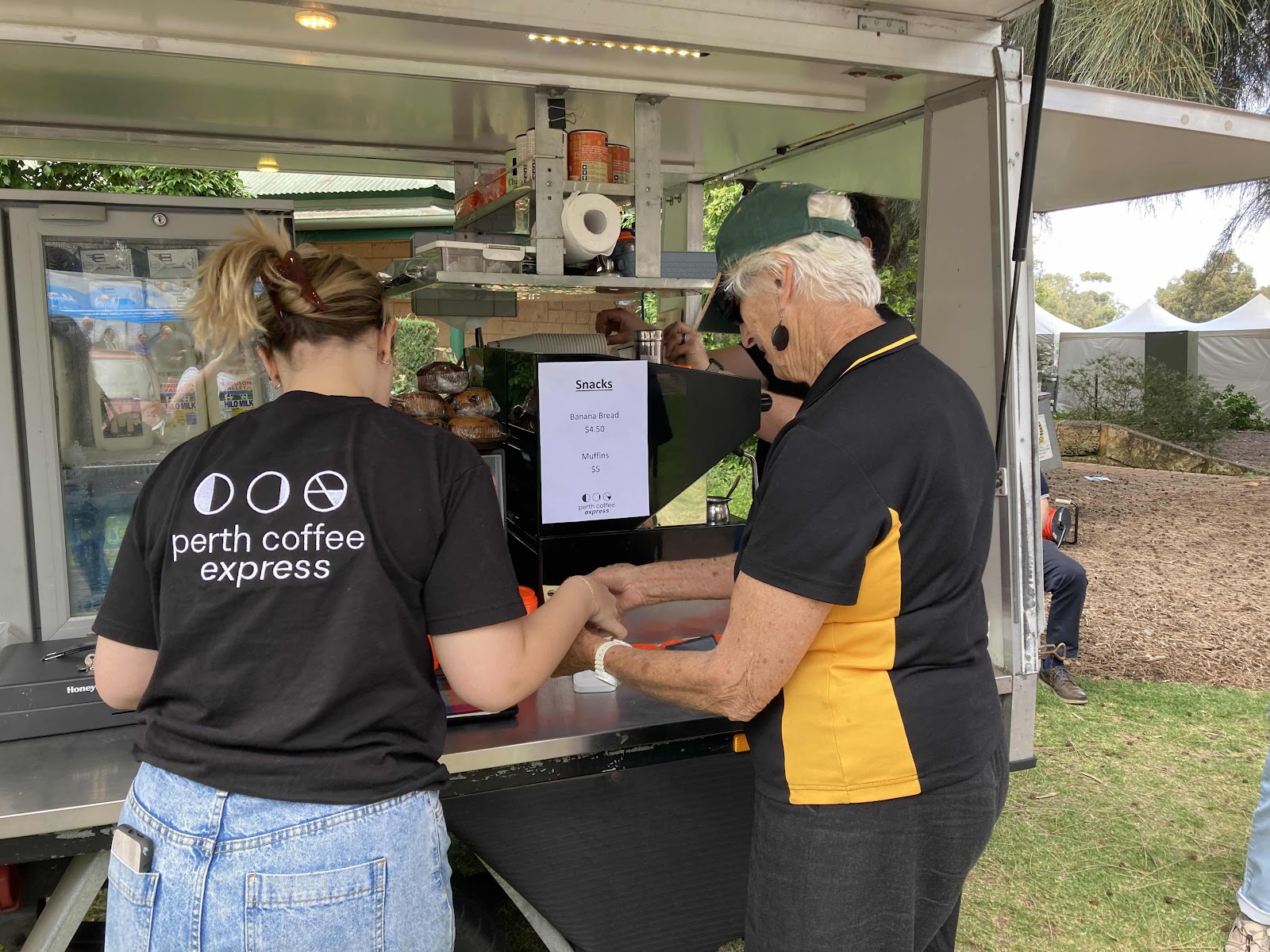 My first stop, of course, was a coffee! My fiend Val is treating me. (According to the publicity, it was supposed to be free - but only in the hospitality tent, I discovered). This was my downfall, as far as trying canoeing or wall climbing was concerned. When Val and I get together, we just talk and talk!
Val goes every year to Have-A-Go Day as an exhibitor. She is a long time member of the MG car club. There were over ten of these all lined up, lovingly polished and shiny. People could only admire the vehicles, no getting in for a drive round the park!

Last night’s monthly lecture at the W.A. Nats Club was a timely follow-on to the impromptu talk we heard at Dryandra. It was given by a committed environmentalist, who has spent the last 5 years studying the masked owl in the area around his home in Margaret River: 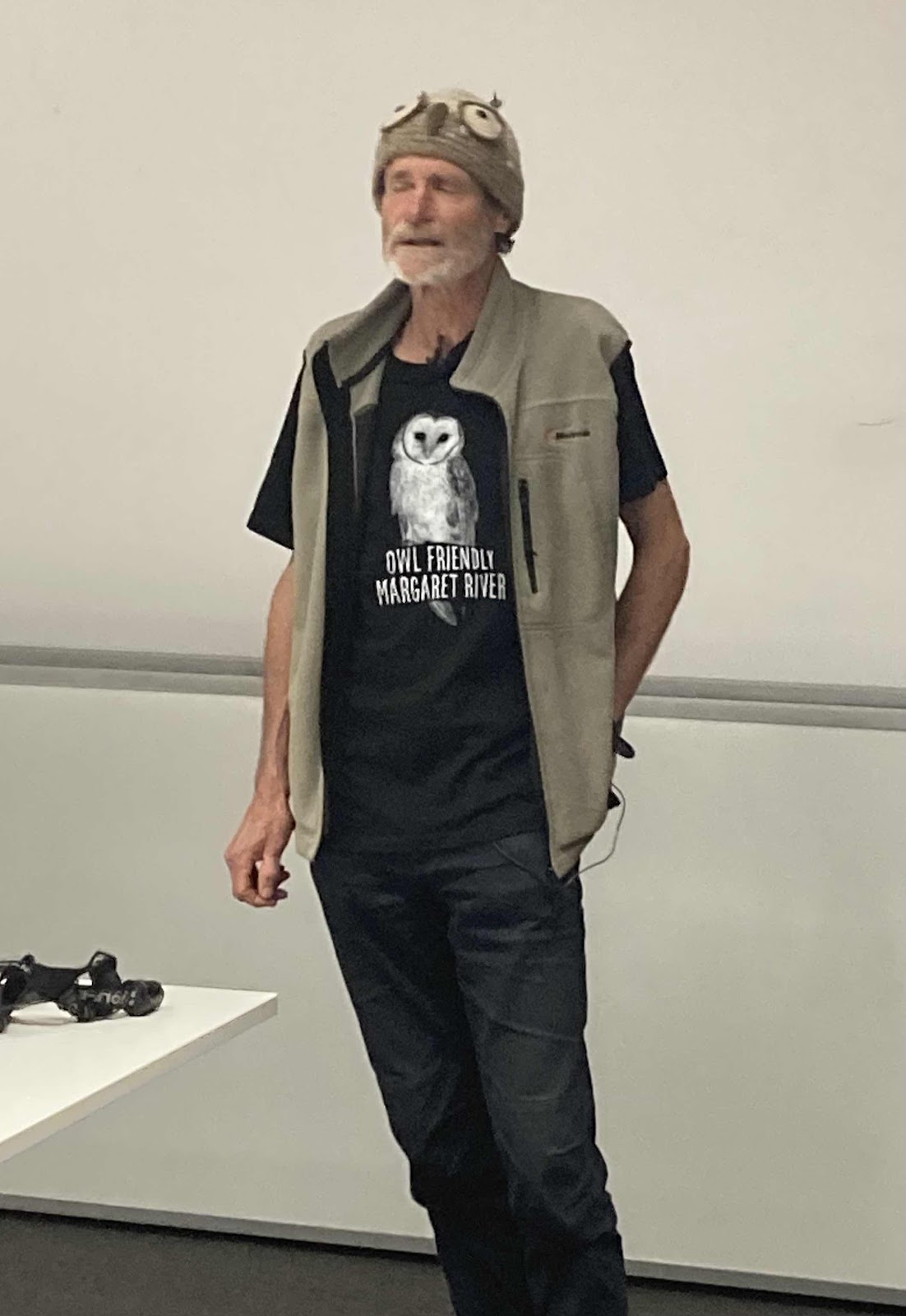 Boyd is wearing a knitted owl beanie and also a t-shirt promoting his community group.
His research is done through sound recorders attached to trees. This is more effective than cameras, since owls nest in tree hollows, often quite high up in ancient trees like karris and marris, and are quite difficult to photograph. There are lots of nests around the town of Margaret River, where gardens are right next to the bush and provide genuine habitats for wildlife.
Masked owls are beautiful creatures, with big eyes in a round face which resembles a white mask. The females can weight up to 900g while the males are smaller at about 500g. This enables the female to sit on the nest throughout the winter, while the male flies back and forth with food for her and later for the chicks as well. The chicks persistently beg for food and go frantic when it arrives! The owls have a surprisingly huge wingspan. They breed every two years. 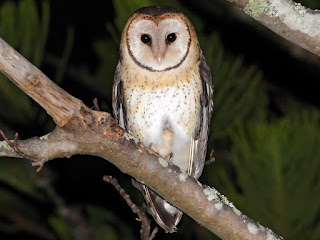 The problem is that 90% of their diet consists of rats and mice, and a good deal of these have been poisoned by Margaret River residents. Rats that have eaten poison still live for a week and go out desperately looking for water. They are weak and are easy prey for the owls. There are two main types of poison: FGARs (First Generation Anticoagulant Rodenticides) and SGARs (Second Generation Anticoagulant Rodenticides). FGARs break down in days, but SGARs last for 9 months. The former are less effective at killing the rats, since they require to be given in several doses, so increasingly SGARs are the ones commonly sold in stores such as Bunnings. Racumin by Bayer is FG whilst Ratsak may be SG. Some countries such as the US have actually banned SGARS.
An Owl Friendly Margaret River campaign was mounted that is a model for community groups throughout Australia seeking a ban on Second Generation Anticoagulant Rodenticides.They held a GoFundMe campaign to raise money and also received help from Bendigo Bank. They sell t-shirts and stickers, lobby businesses and give talks in schools.
More information about the harmful effects of rodenticides can be found here
This article is from The Conversation which makes academic research available to the general public.
Posted by Margaret Butterworth at 9:50 PM 1 comment:

I am still attempting to identify some of them.
Dryandra Woodland is named after the Dryandra bush, which has now been re-named as Banksia Nobilis: 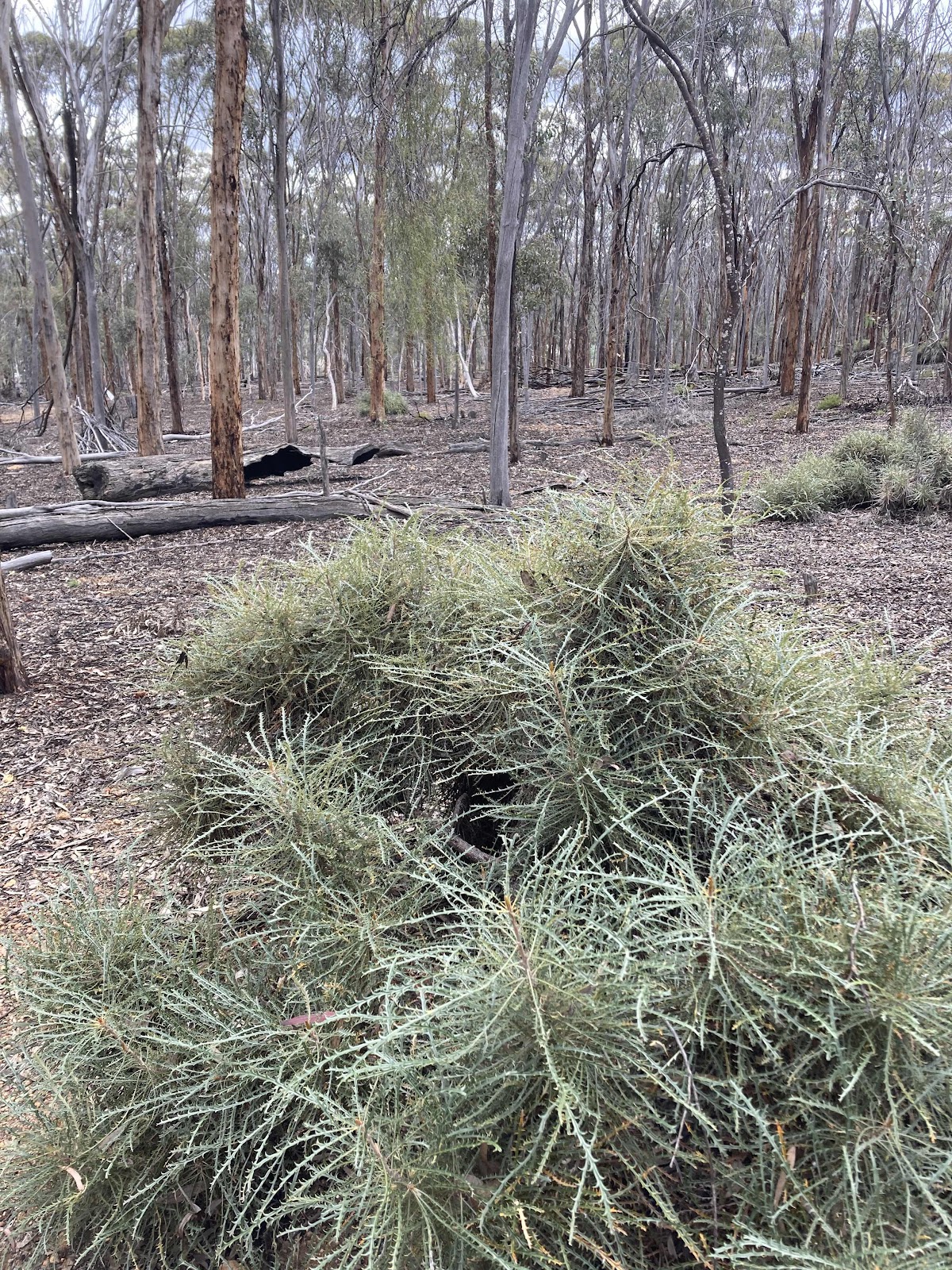 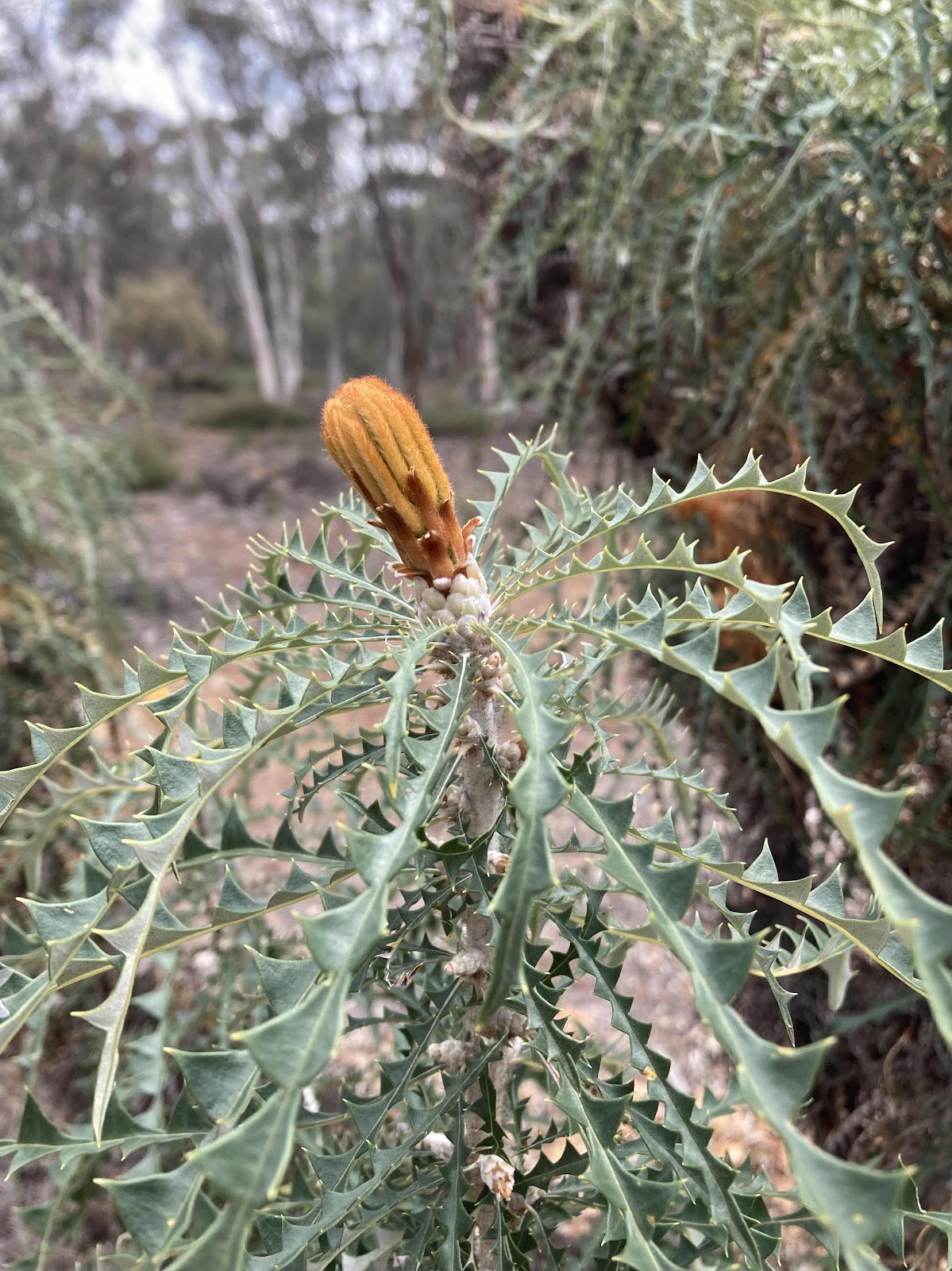 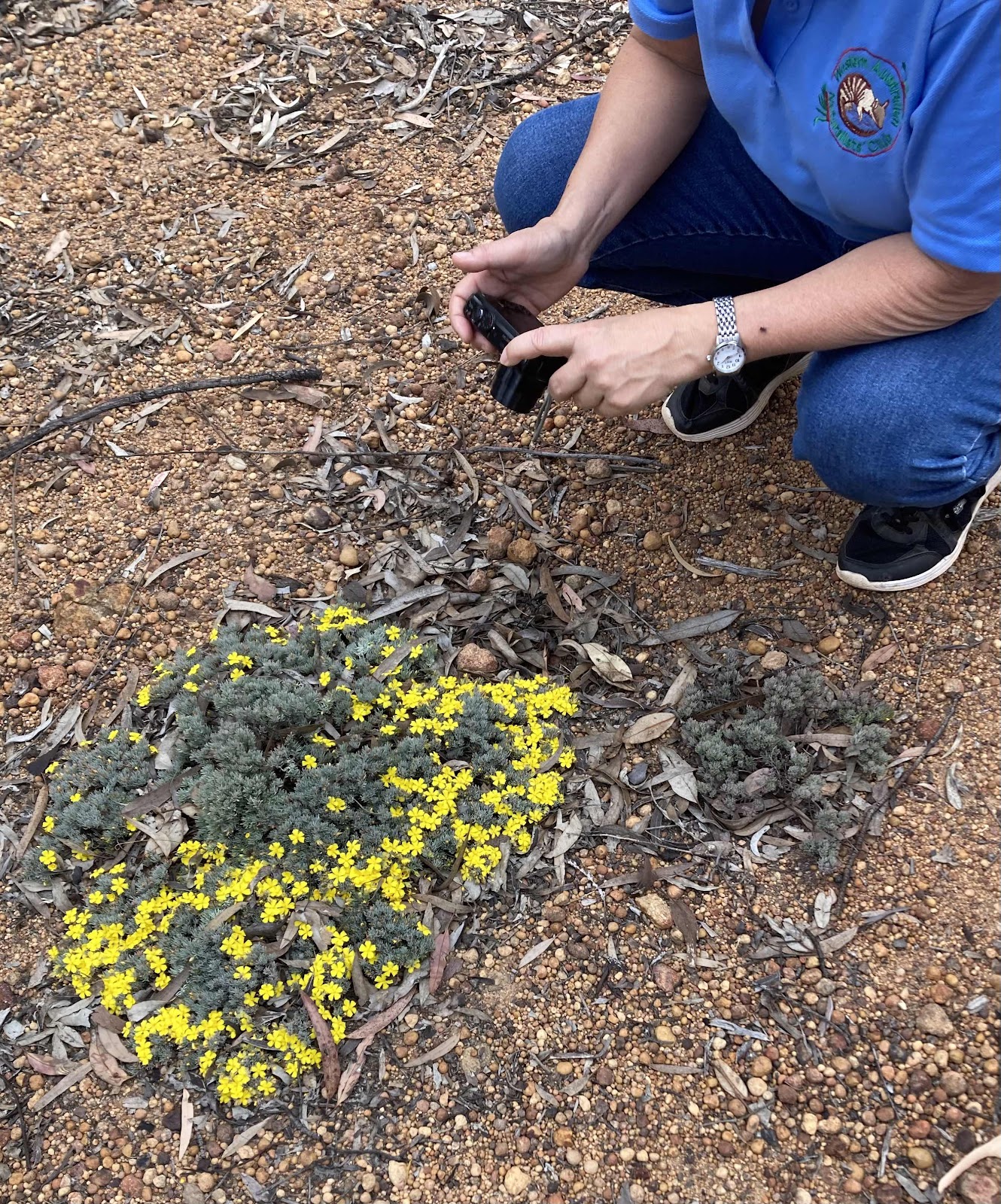 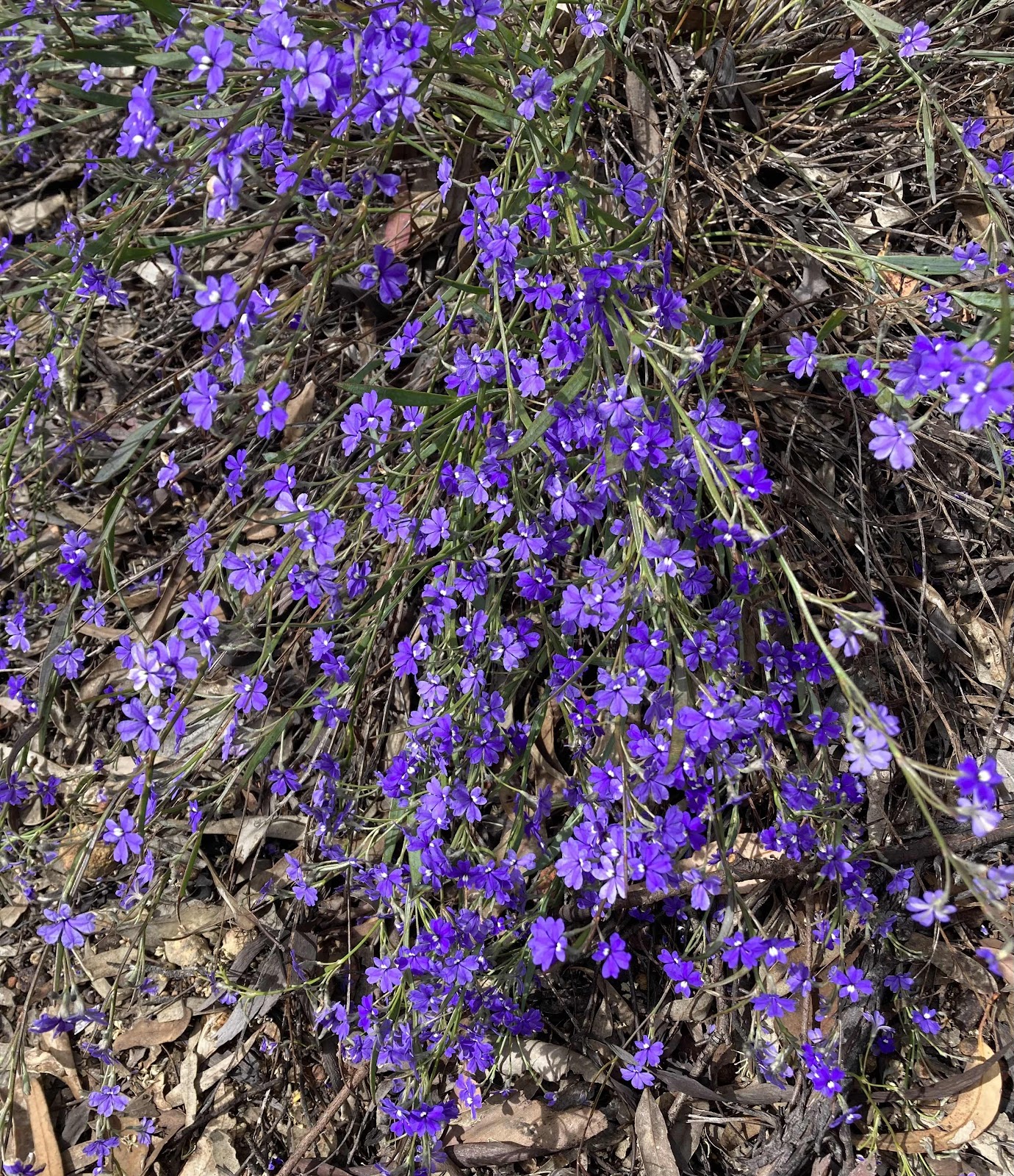 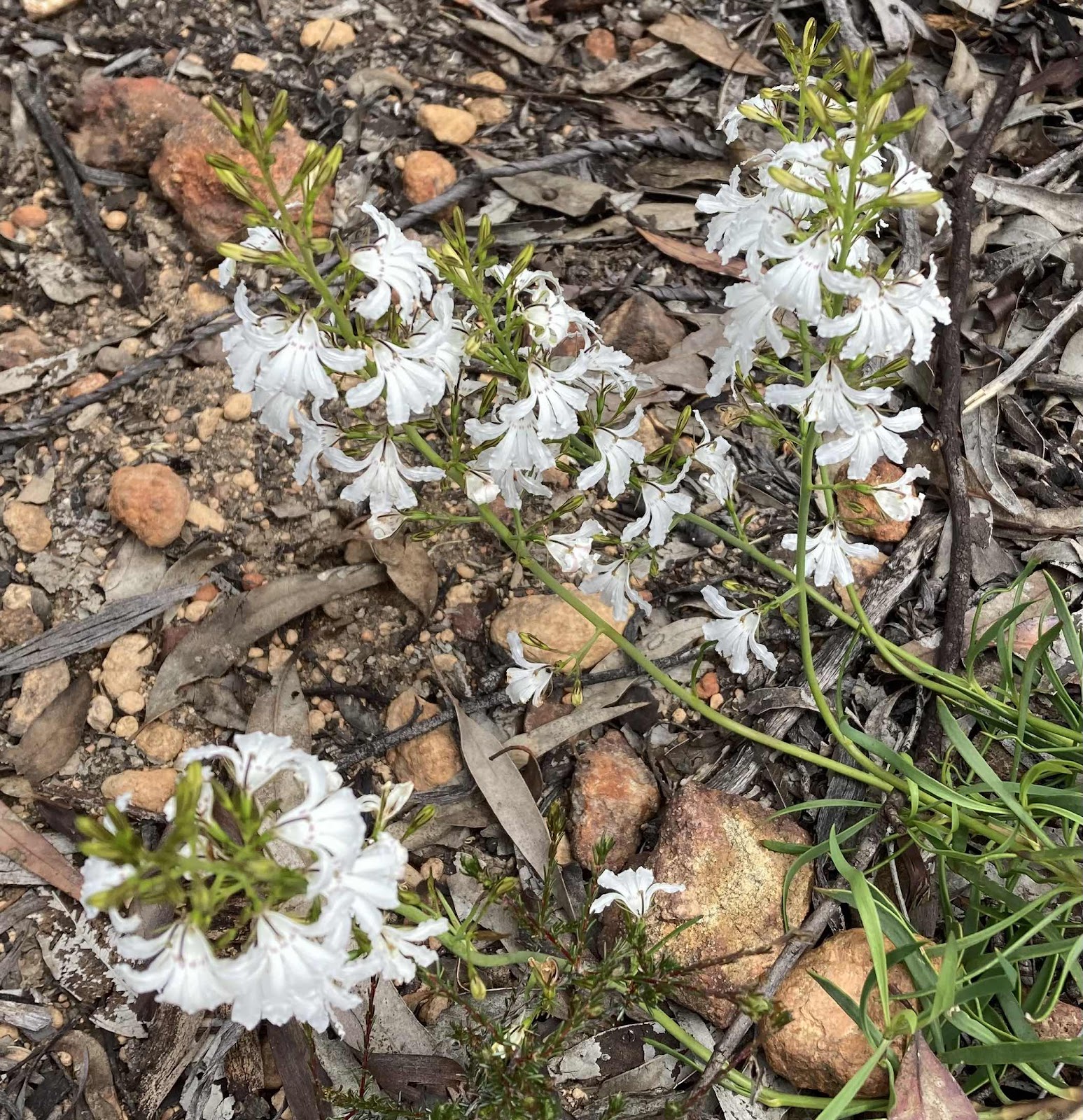 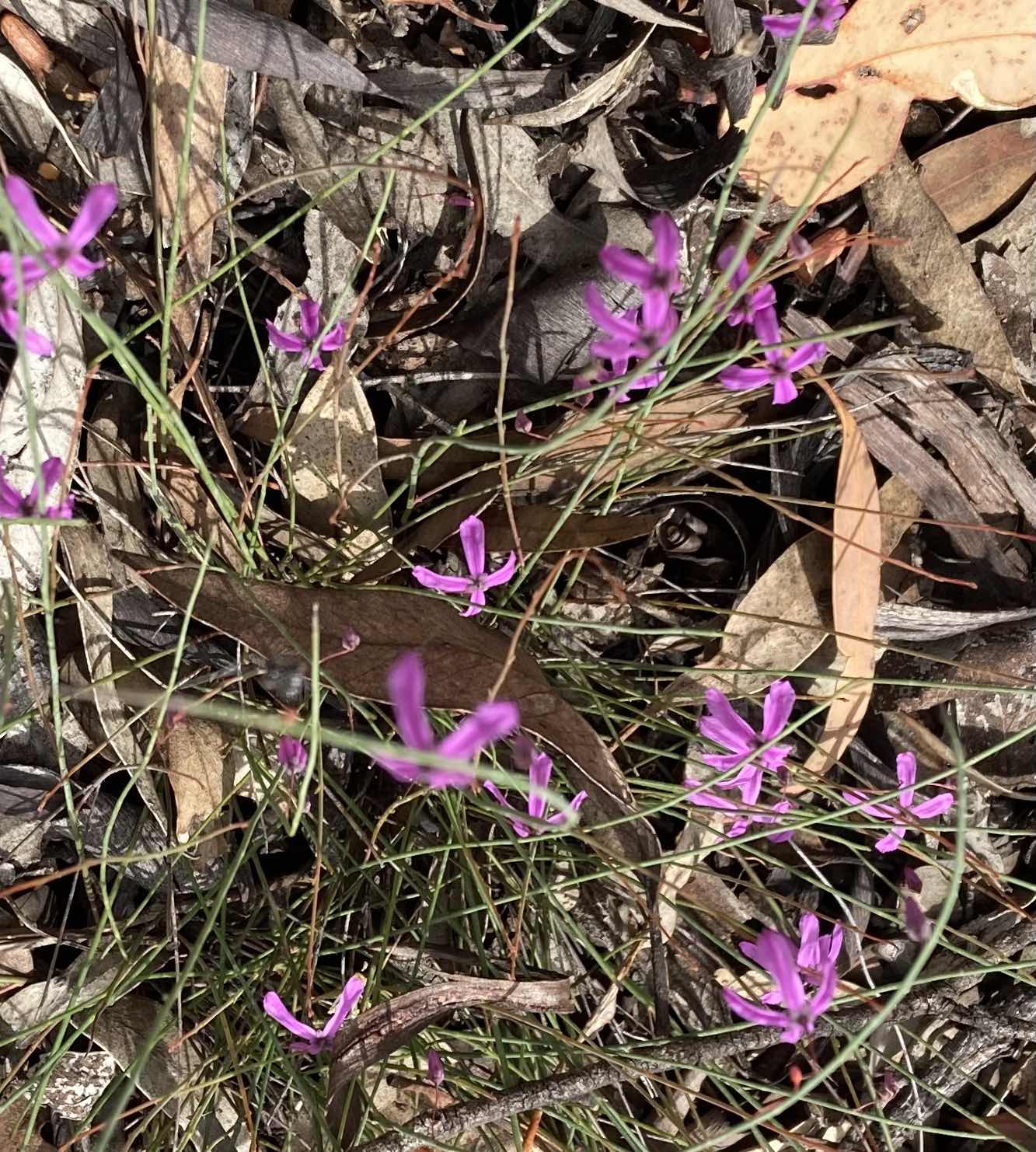 On our last morning, a few of us went on a walk to the Ochre Pit. It was rather warm, so Arlene and I chickened out when we came to a steep flight of steps, knowing that we would have to climb up again. It turned out that we had misunderstood the information board at the start and walked the long way round the loop. However, there were some mistakes on this board, so it was not entirely our fault!
When we returned to the cabin, we were very jealous to hear that Annette had been for a drive and found an elusive numbat in the bush just near the road. It had made her day, as she was able to observe it at close quarters for twenty minutes.
Posted by Margaret Butterworth at 8:35 PM No comments:

There was a profusion of wildflowers everywhere. This is just a small selection: 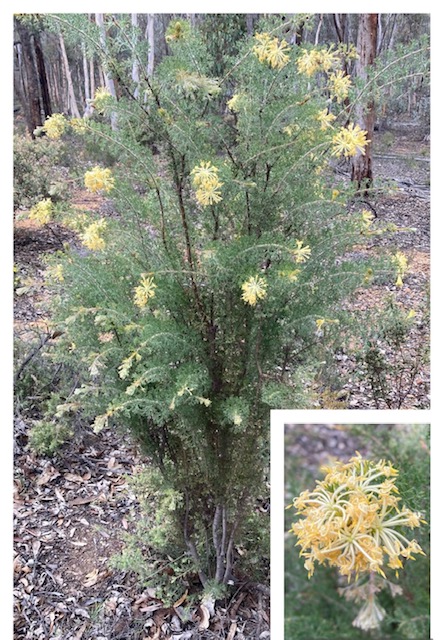 Research is needed to find out which animals are resistant to the bait. Some of these animals are eaten by humans, especially in Aboriginal communities.

Testing can only be done on a dead animal. (Testing is done on the liver, which is not really possible when the animal is alive). The top predator in the wild is the eagle: a beautiful bird, often endangered without this other threat.

This talk, given by Michael Lohr from the consultancy group 360environmental, was a wake-up call about the indiscriminate use of rat poison in the community.

This talk was given by Michael’s wife, Cheryl Lohr. She is in charge of Lorna Glen, a conservation reserve near Mullewa. Her current research is how to deal with feral cats in an arid landscape. We know how to deal with foxes, which are the other big predator of native animals. The poison 1080 is typically dropped from the air. Cats don’t eat these baits. Cheryl measures how native species in WA  react to 1080 poison.

The difficulty for Cheryl is that they don’t know exact how many feral cats are on the property. It’s very difficult to count them before and after putting down baits. One inexact method is to look for their paw prints crossing a dusty road for 4 nights in a row. They drag a chain over the road each night to produce a clean slate for the following night.

There are 120 wildlife cameras on the property, but the cats seem to avoid having their photo taken. The property is 250 square kilometres. There is also a huge amount of paperwork connected to animal trapping and research. After an intense trapping programme, lots of cats are eliminated, but a high rainfall event results in a successful breeding period and numbers creep up again.

These talks were given “off the cuff” by members of the DRB group, as we all sat down for a rest between our expeditions! Their son, Martin, aged about 7 or 8, then suggested that we all had our photo taken on the Flying Fox in the children’s playground:

More on pesticides at a forthcoming Nats Club talk:

Listed as a Priority 3 species in SW WA, the Masked Owl (Yornitj in the Wadandi language) is so little known that the WA Museum’s Handbook of WA Birds has no description of its nesting. For the past five years, Boyd and colleagues have tracked down and investigated through observation, photography, sound and food pellets a surprisingly vibrant peri-urban population around Margaret River of this large, charismatic but enigmatic forest relative of the Barn Owl. They have found that Yornitj is a specialist predator of rats in the peri-urban mix of remnant forest, agriculture and gardens of the Margaret River.Ironically, this means that this is one of the most threatened of many wildlife species subject to debilitation and death through unrestricted sale and use of modern ‘one dose kills’ rodenticides. In response to this realisation, an Owl Friendly Margaret River campaign was mounted that is a model for community groups throughout Australia seeking a ban on Second Generation Anticoagulant Rodenticides (SGARs).

Posted by Margaret Butterworth at 9:50 PM No comments:

There was never a dull moment, as something was planned for every hour, day and night - thanks to the tireless organisation of A. The DRB (Darling Range Branch of the Nats) had so many interesting members who gave little talks about their work, such as how to eradicate feral cats or which pesticides not to use. I was the only person not in the DRB, so I made a few new friends.
As soon as I arrived, the caretaker lady insisted on pointing out a tawney frogmouth’s nest with two babies in it. These birds have an enormously wide mouth and have really good camouflage to blend in with their surroundings:

The closest walk to our cabin was to the arboretum, where clumps of various trees and shrubs had been planted and labelled.: 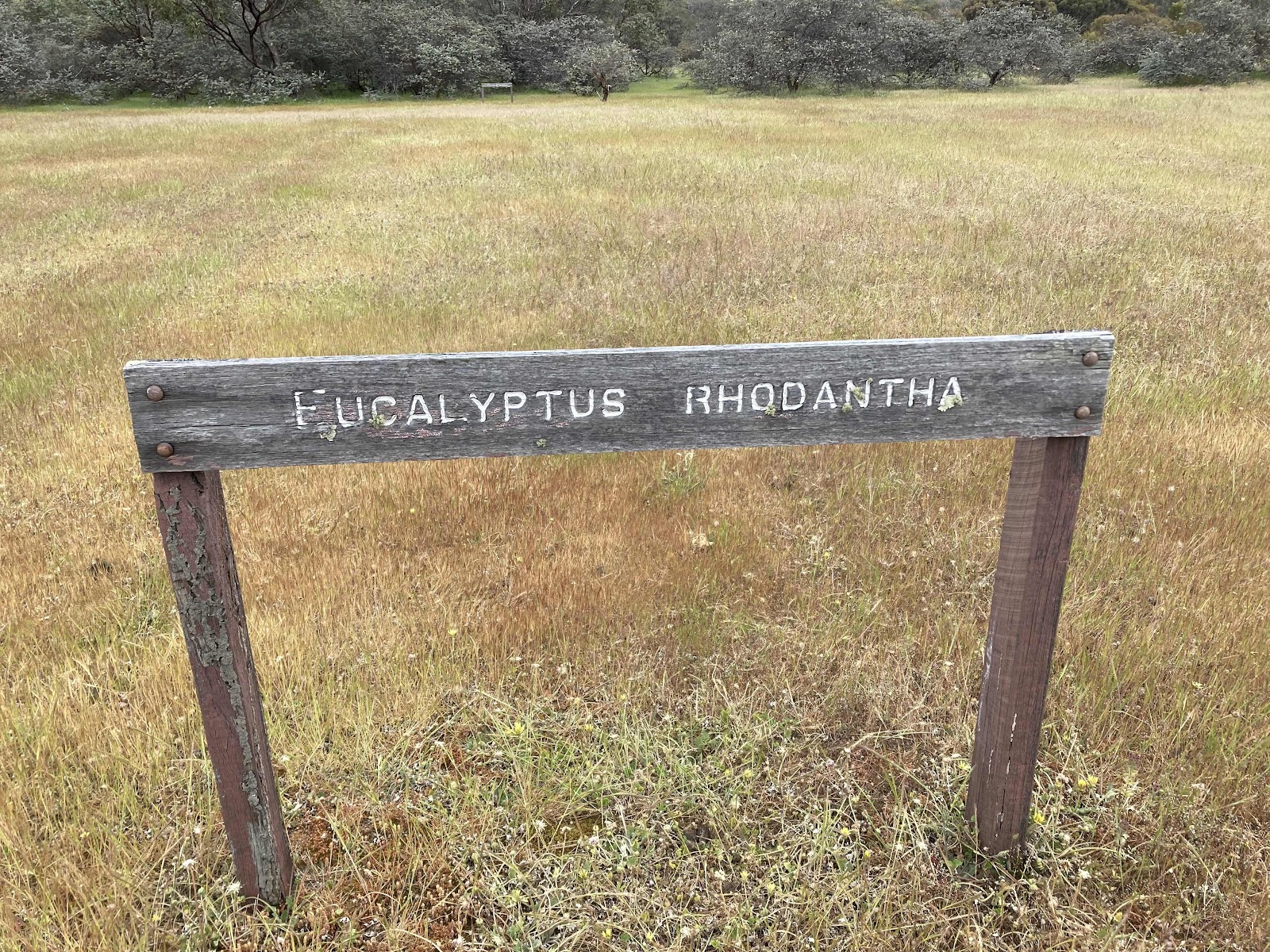 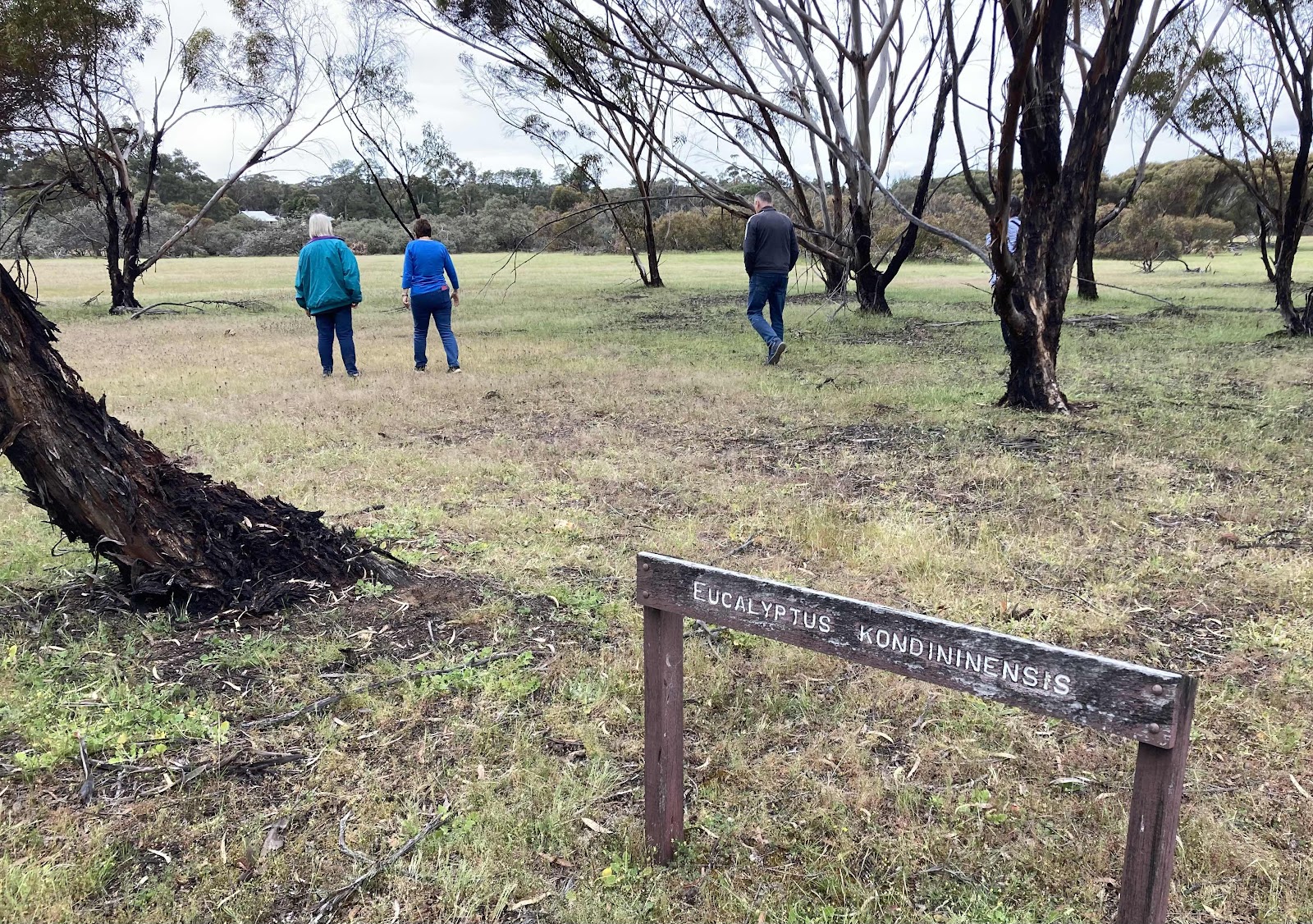 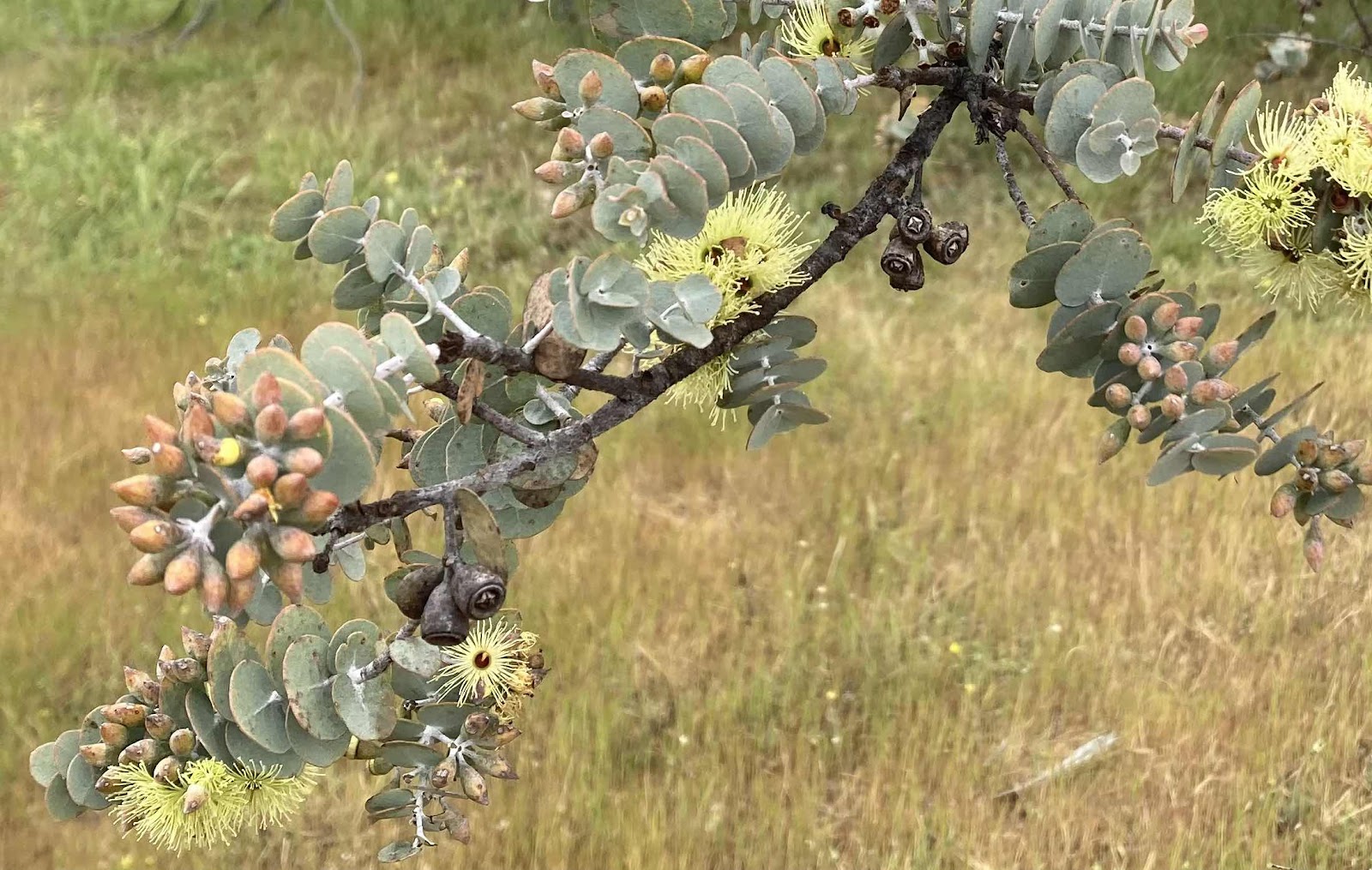 Saturday morning’s walk was to the Old Mill Dam: 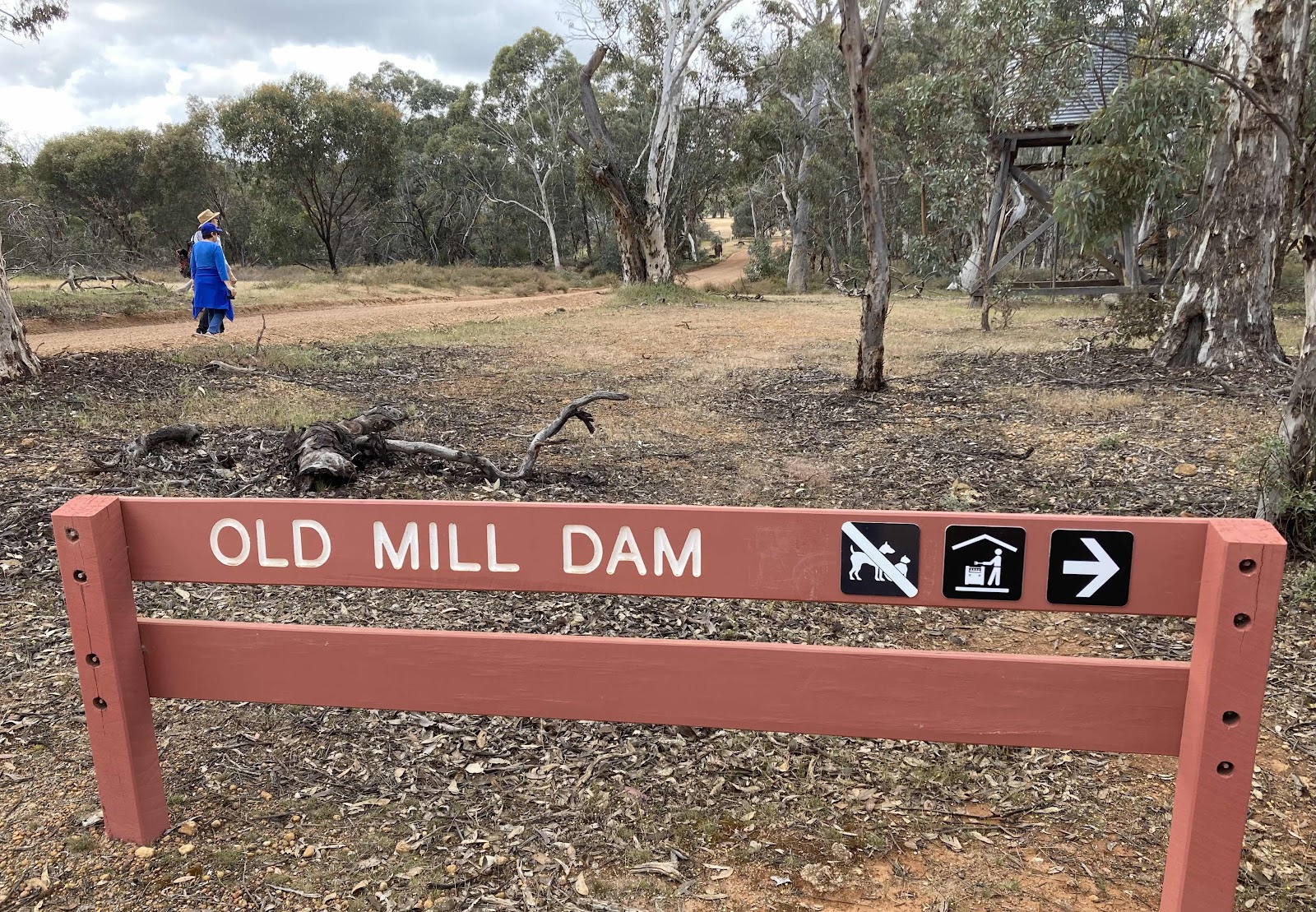 I chatted to Andrew, a 15 year old boy who knew everything about insects. He pointed out the remains of the larva from which a dragonfly would have emerged: 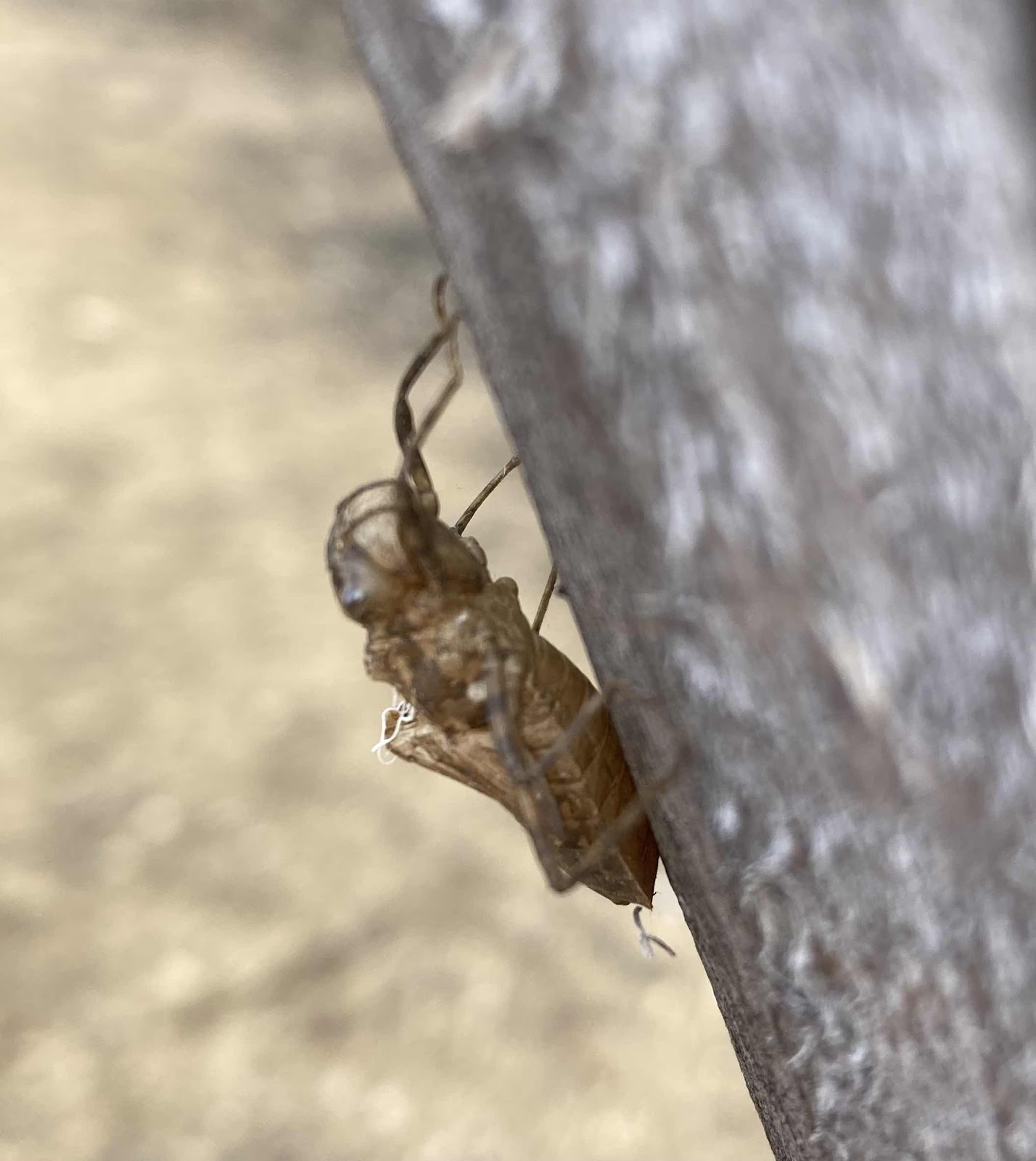 There were several information boards about Vincent Serventy, one of Western Australia’s most famous naturalists: 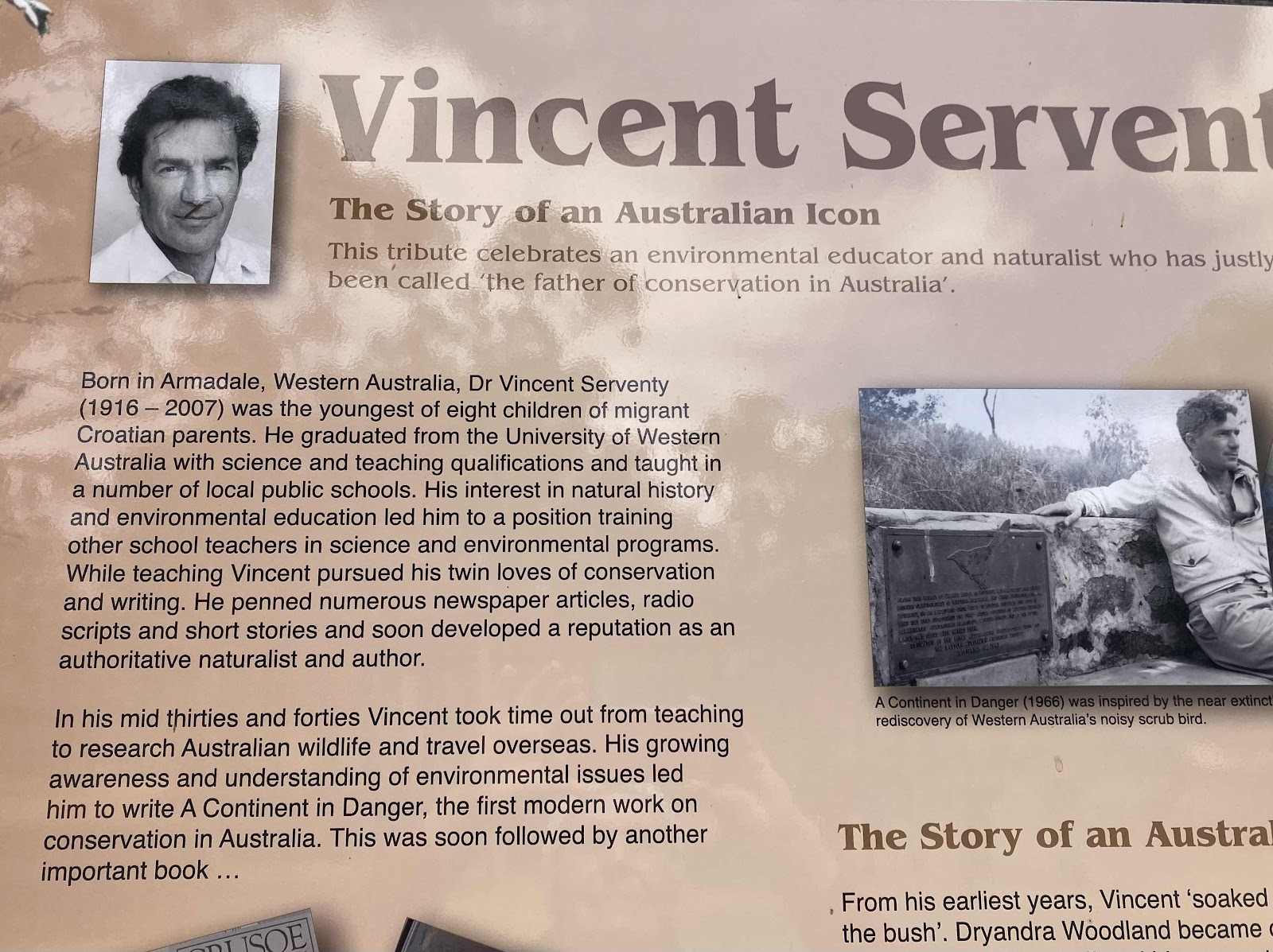 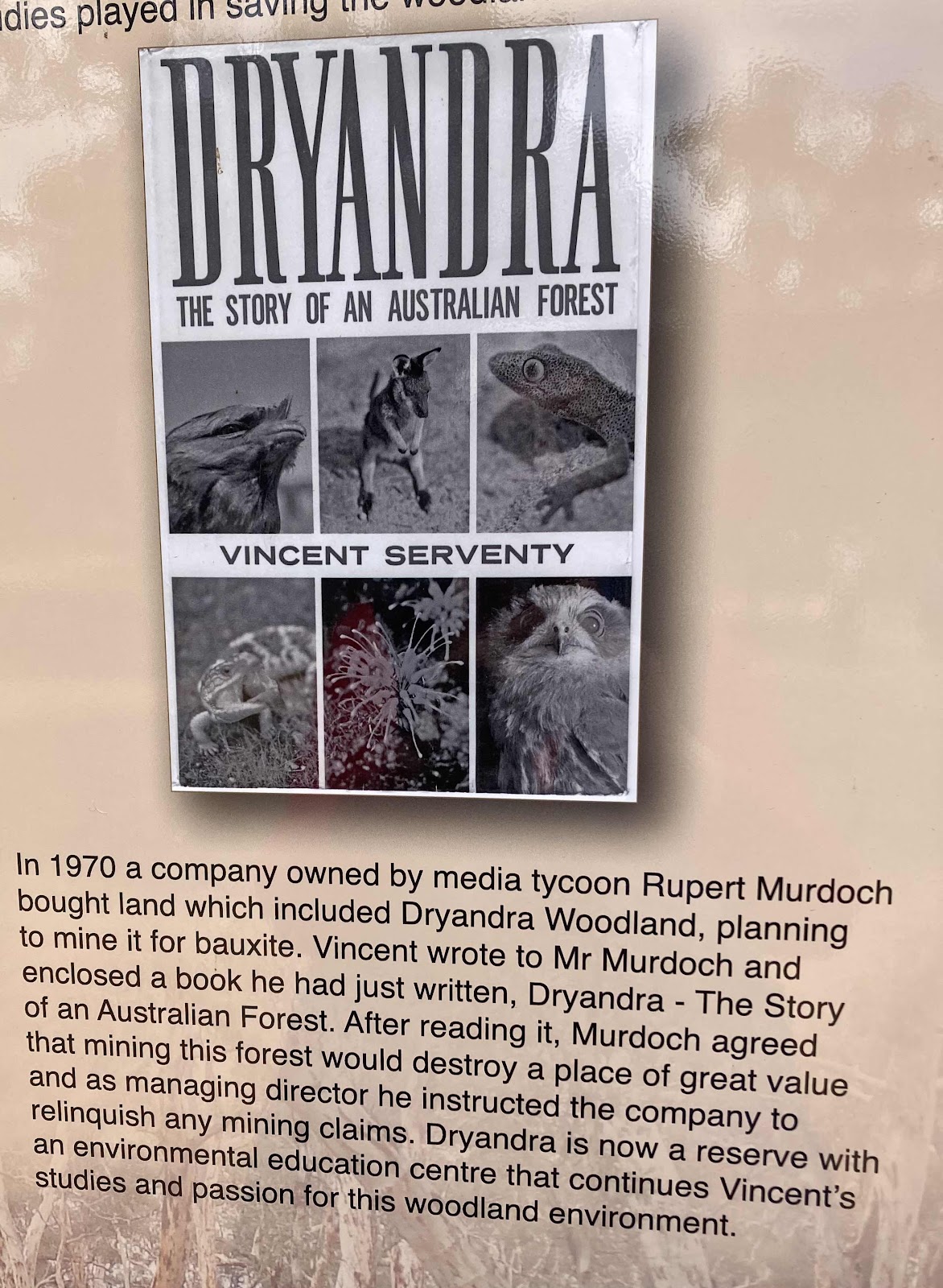 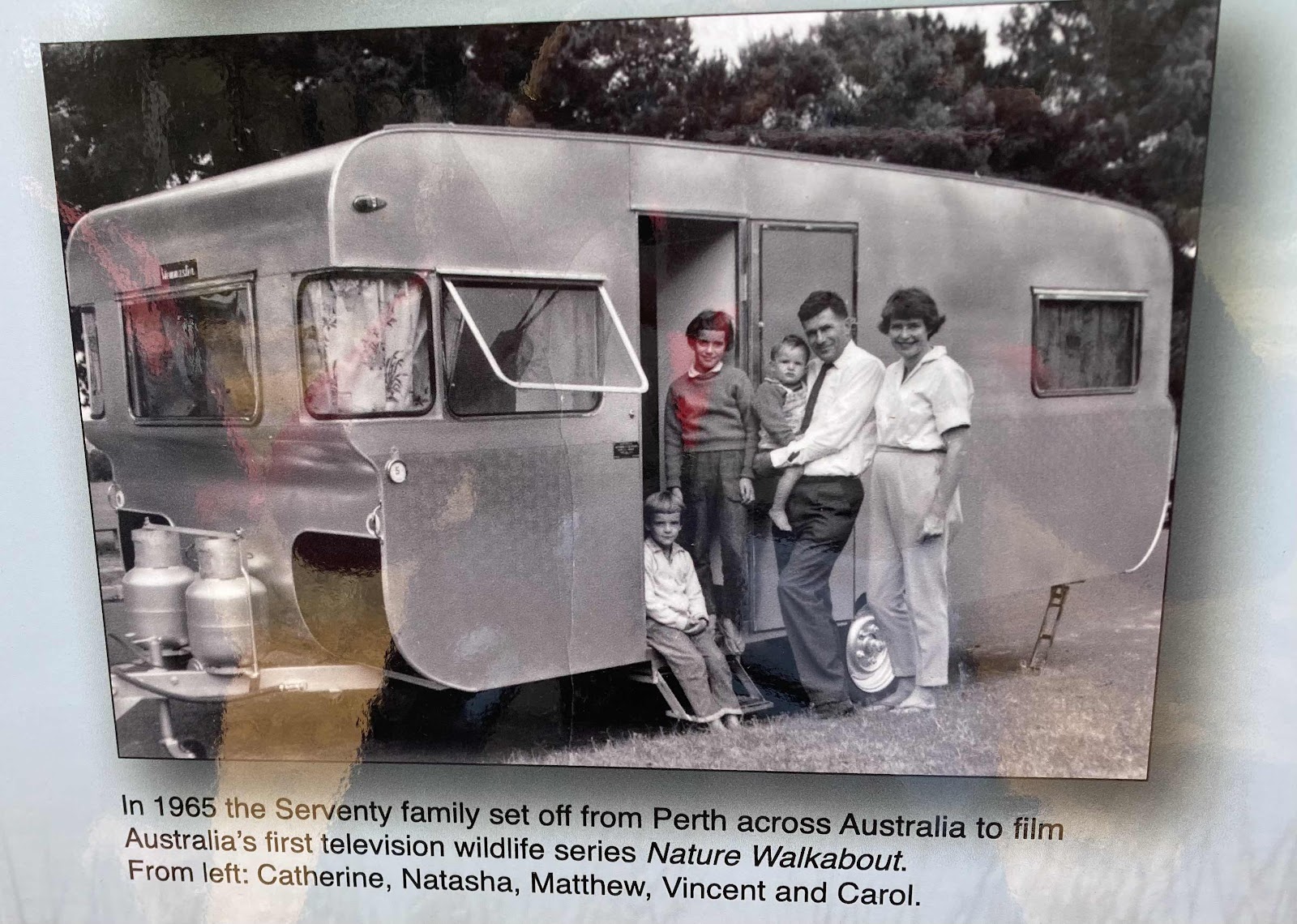 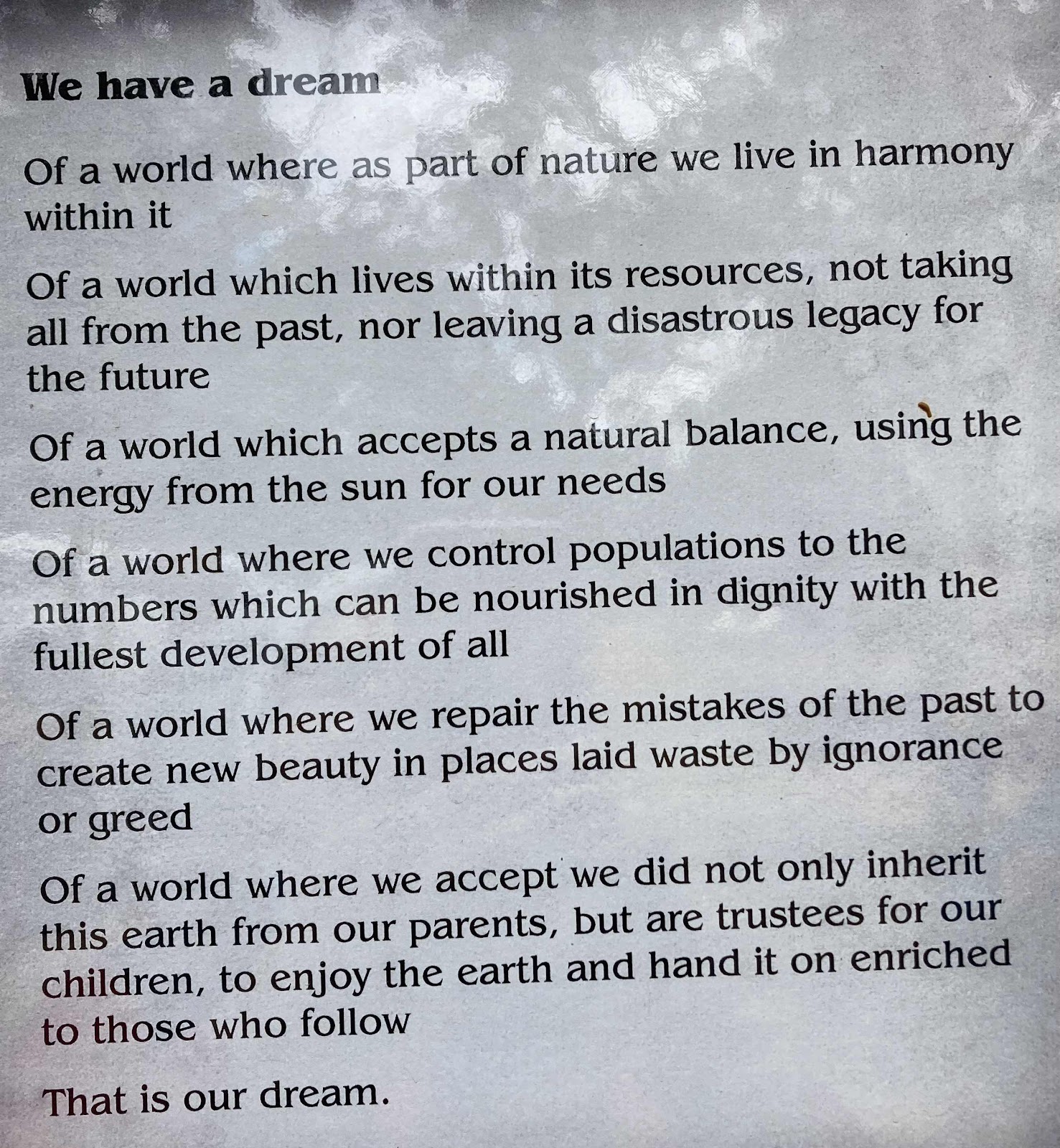 There was also this board about the elusive numbat, but I didn’t manage to see one over the entire weekend: 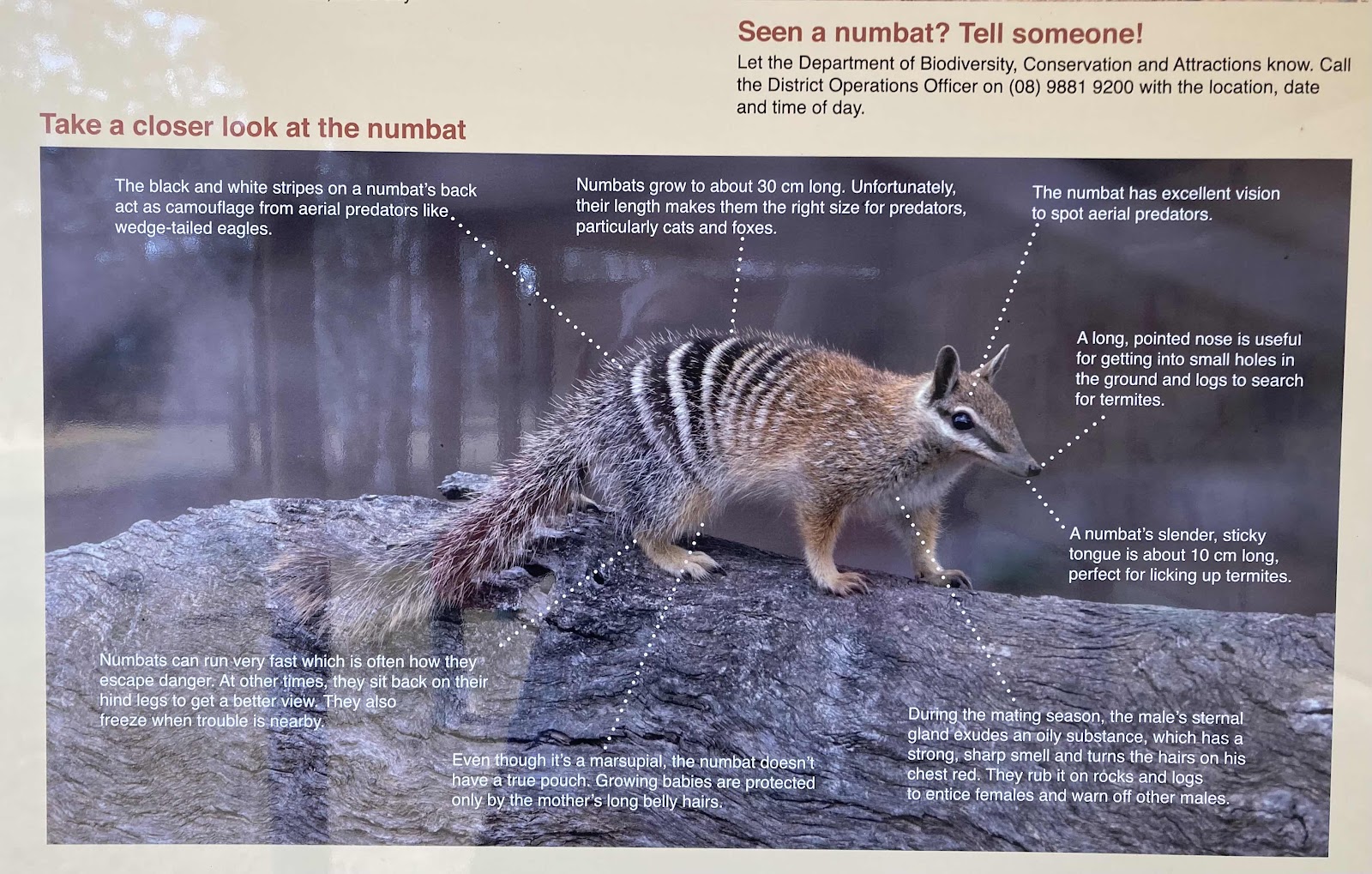 In the evening, everyone set off for Barna Mia. I was on my own. A load of wood arrived and the caretaker offered to get my fire going, as I pretended to be a helpless female who knew nothing about lighting fires! Last night’s cold was all forgotten, as I enjoyed my Osso Buco, reheated in the microwave, with a glass of red in front of the fire. Bliss!

Posted by Margaret Butterworth at 9:07 PM No comments: