We went down memory lane last night at a meeting of the W A Nats Club, when the guest speaker was Kevin Coate. Before retiring, he used to organise trips to the Kimberley. In fact he pioneered these, when it was a largely unknown region to tourists, and set up a company, Coates Tours. Later he sold this company and remained a respected and invited guide on many expeditions up north. JL and I went on two of these camping trips when we were a lot younger and fitter.

I was a newcomer to the Kimberley at the time, but JL had worked there as a young engineer, looking for potential dam sites which could provide a water supply for the region. He went out with a survey assistant and an aboriginal tracker. They found the ideal site for the magnificent Ord River dam which created Lake Argyle.

Back to Kevin Coate: on most trips, he was accompanied by his wife Yvonne, whom he had met at primary school. His desk was right behind hers, and he once dipped her plaits into the inkwell - so he said! He was full of such stories and made a very entertaining presentation last night.  He included a selection from his huge slide collection of flora and fauna and landscapes of the Kimberley. 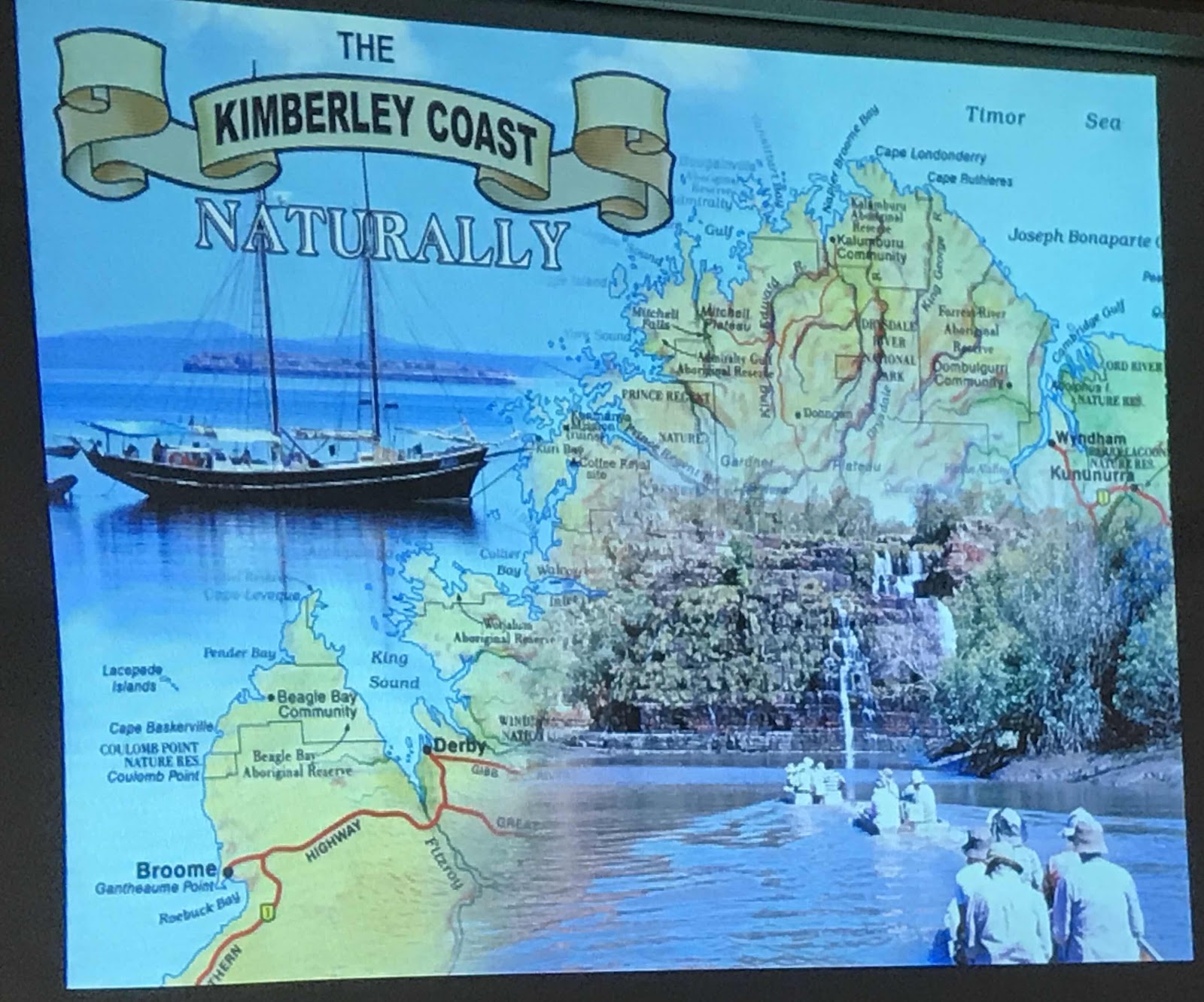 My photos are of the projection screen which is why they are an odd shape. 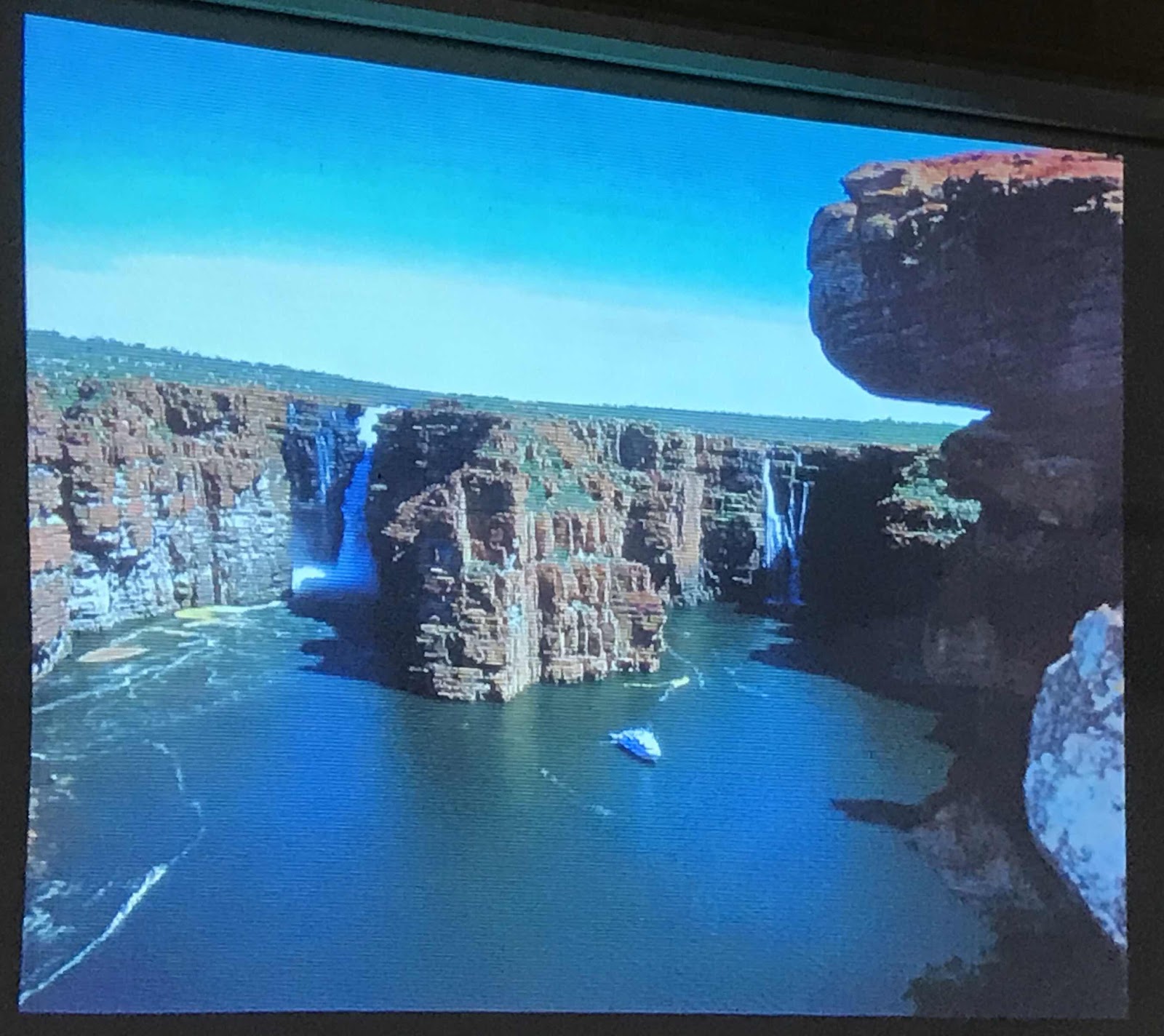 King George Falls, with the little boat below them. 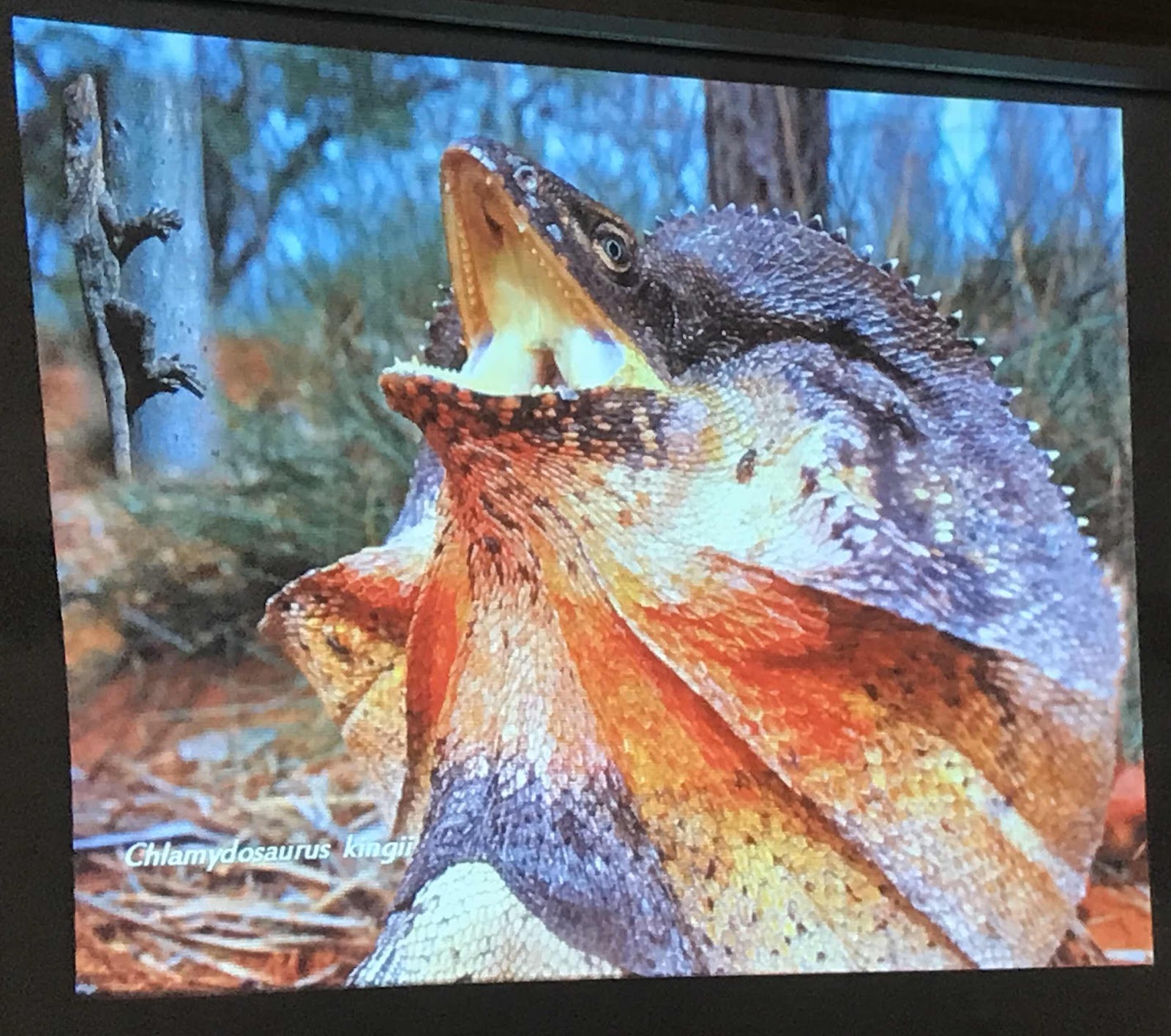 Frill necked lizard. Another lizard, with his frill retracted, climbs the tree to the left. 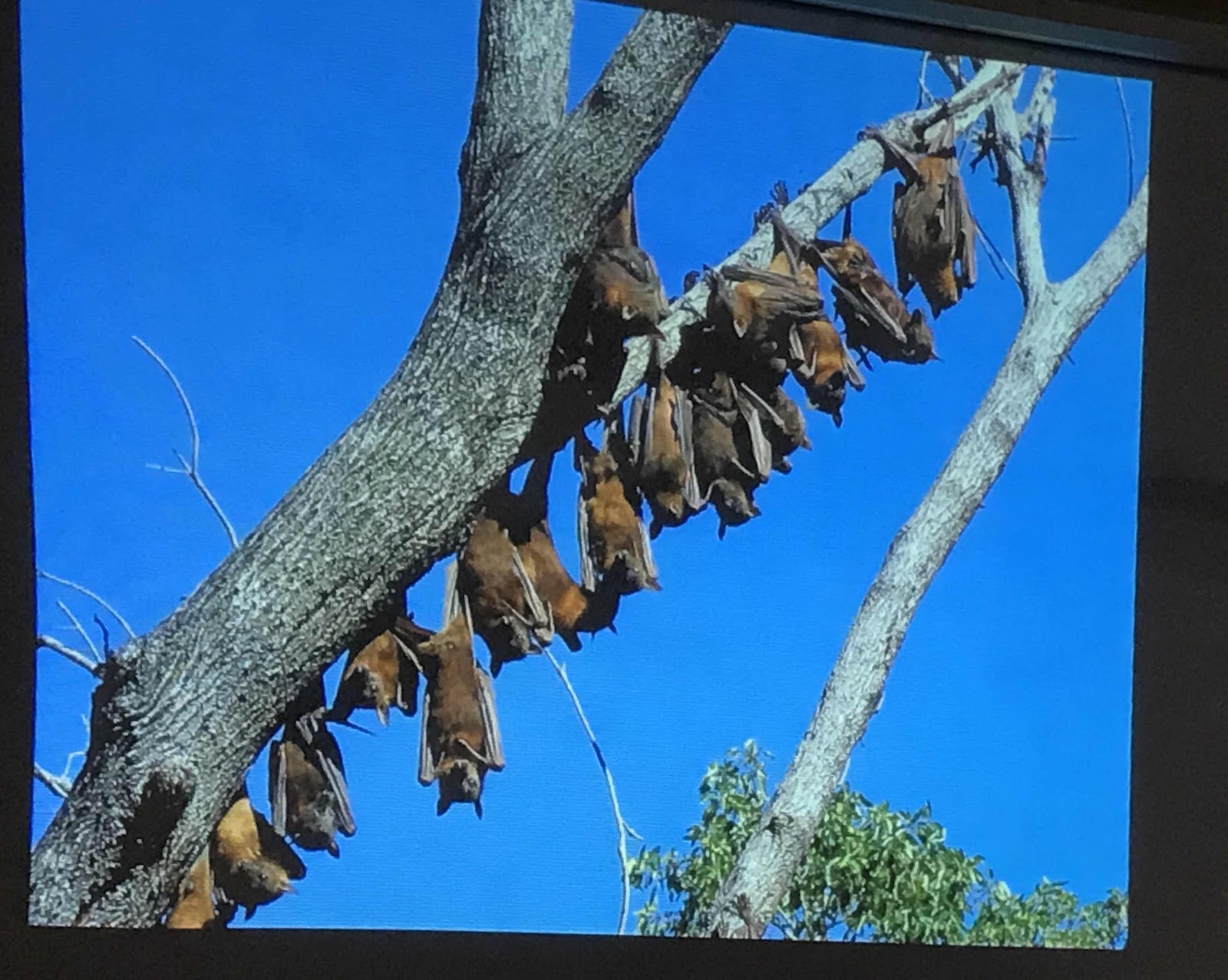 Fruit bats hanging from a tree.

We had a great time in the Kimberley. I remember especially Montgomery Reef, where twice a day at low tide water pours off the reef at great speed. We also camped for a week at Kingston Rest, a cattle station near to Kununurra, which was owned at the time by Kevin’s daughter and her husband. We put up our tents near a billabong covered in purple water lilies and were woken at first light by the loudest dawn chorus of birds imaginable. I just wish I had kept a blog in those days.

This book was on sale. It was a perfect birthday present for JL: 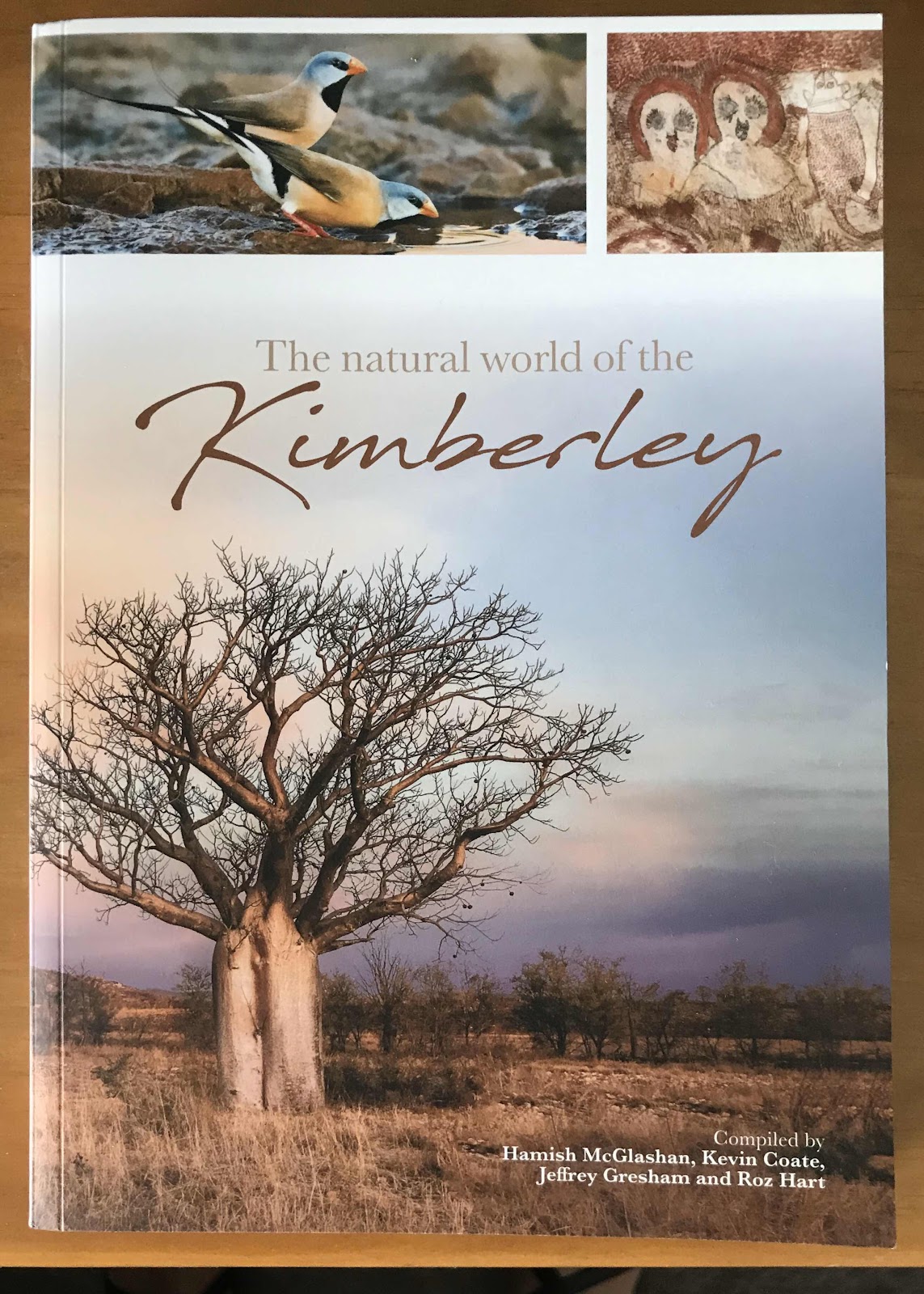 Posted by Margaret Butterworth at 8:17 PM